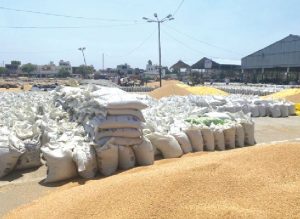 At a time when the industrial and business activities in Punjab have come to a standstill, Captain Amarinder Singh-led state government is looking up to farmers to keep the wheels of economy running amid Covid-19 pandemic. It goes without saying that the crisis has once again reminded us all to acknowledge farmers as messiahs for their crucial role as providers of basic food — wheat, rice, vegetables or pulses- which is helping people survive during the lockdown.

The ongoing procurement of wheat in Punjab, the way it has been planned and conducted is enough proof of its importance for the government and other stakeholders.  Facing imminent revenue loss of 22,000 crore due to extended lockdown, the only hope is accruals to the tune of about 30,000 crore through the sale of wheat which according to the Chief Minister Captain Amarinder Singh is “a critical contribution at this juncture” to the state’s economy.

As it is said extraordinary situations require extraordinary responses, the conduct of staggered wheat procurement expanded from earlier 20 days to 45 days now involving over 17 lakh farmers, 26,000 commission agents at 4300 mandis — more than double of 1834 during pre-Covid-19 situation- posed a huge challenge for the Punjab Mandi Board (PMB) which has introduced, so far, unmatched technology interventions to facilitate hassle-free procurement. Its Secretary, a dynamic IAS officer and technology buff, Ravi Bhagat told this writer that all the procurement arrangements this time were made keeping in view the unique situation prevailing countrywide due to Coronavirus threat.

“That’s why e-Token system was devised so as to limit and stagger arrival of famers in the mandis with their produce to ensure strict compliance of social distancing norms. They are coming to mandis only when asked. We have, so far, distributed 30,000 litre sanitizer and 2 lakh masks to prevent infection at mandis. a control room run by 34 officials. Mandis have been divided into zones and care is being taken to leave sufficient space between each pile of wheat. Drones have been deployed to ensure regular monitoring of the operations including cleanliness. For us, the main challenge was to regulate the flow of wheat-laden trollies into mandis so as to maintain social distancing; sanitization of the place, facilities to farmers and timely procurement of the produce,” said Bhagat, who has developed 36 Apps so far.

As a reality check, what Amarjeet Singh Cheema, a farmer from village Uppli in Sangrur district said and what was officially claimed did not seem to vary much. He endorsed the official claim of regulated procurement operations for which the farmers, for their awareness and compliance of safety protocol, are to be as much thanked for. The system of passes issued to farmers is also working well. “I took my produce to the mandi in the morning and returned the same evening after its purchase. The biggest relief for any farmer is assured hassle-free payment,” said Cheema who sowed wheat on 17 acre and half of which he has sold so far.

To contain rush at mandis, another important measure PMB has taken to convert premises of rice shellers and village schools which are closed due to lockdown into makeshift procurement points. Jagdish Thind of village Gohlu Ka Morh about 11 kilometres inside Indo-Pak Border in Ferozepur district did not this time have to travel to the nearest mandi about 6 kilometres away. “The commission agent arranged to lift our produce from the premises of a school on our village outskirts. All safety measures against Coronavirus were maintained,” he said.

The biggest gain from the technology intervention in the procurement system this time is elimination of any malpractice, use of influence by big famers in getting their produce lifted on priority. Their influence used to leave small famers high and dry. As a result they had to spend days waiting for their turn and used to suffer financial setback if weather played spoilsport damaging their produce lying in open at mandis. “Now no special favour is possible to anyone. The regulated entry of farmers has removed any scope of “discretion” of anybody, be it commission agent or procurement agency officials in wrongly prioritizing purchase,” Bhagat pointed out. 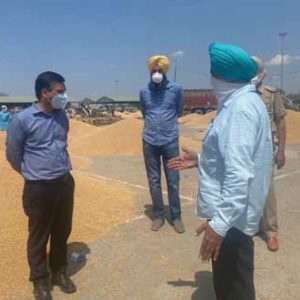 The procurement has come to the rescue of thousands of migrant labourers even other than those working traditionally on farms whose movement was restricted due to lockdown.

The farmers were facing labour shortage as many employed by them had left for their respective states on account of Holi and for other reasons but failed to return.

As Cheema said there have been reports about demand of 6000 per acre. The situation has provided an opportunity to non-farm labour rendered workless due to cessation of industrial and construction sectors to earn from farm harvesting and procurement operations.  In several areas of the state, harvesting has not yet started. 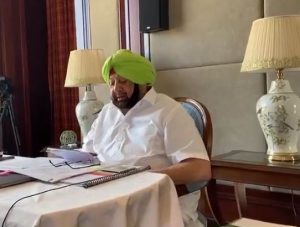 edited Excerpts from an interview •

How crucial is wheat procurement this time for the state’s economy under pandemic impact?

Punjab’s economy has been basically agrarian, with wheat and rice the two key crops. It’s our strong agricultural base that has made India self-sufficient in food. So procurement of the grain is of huge importance for us at any time. This time, however, it has become even more so, due to the Covid-19 crisis. The challenges we are faced with in carrying out the mega procurement operation safely, while ensuring all health safety protocols, is one side of the story. At the other end is the fact that lakhs of Indians are starving or bordering starvation due to the sudden lockdown, and the grain we procure now will help us feed them, not just in the state but across the nation. Punjab has been contributing about 30-35 per cent of wheat procured for the central pool to ensure required buffer stocks of the country.

So it is not just about the economy but also an urgent social need for the country. As far as Punjab’s economy is concerned, with industry and business shut down, and revenue receipts completely drying up on account of GST, VAT, excise duty etc, we need to pump in whatever money we can into the system to meet the immediate Covid-19 related medical and relief needs. We estimate that we shall be able to invest Rs 30,000 crore of revenue earned through the wheat procurement operations into the state’s economy — a critical contribution at this juncture.

I am happy to say that the procurement is going on smoothly and the process has stabilized, with good arrivals and purchase while maintaining all safety and social distancing protocols.

We are expecting harvest of about 18.5 million MTs of wheat during Rabi 2019-20 and market arrivals are likely to be about 13.5 million MTs. And let me assure the farmers that even though the season is somewhat staggered due to Covid-19 crisis, every grain of wheat which the farmer wants to sell will be procured.

How your government is ensuring that farmers get hassle-free payments?

This year, we were shifting to direct bank transfer of the payments to the farmers and had amended the rules accordingly. But due to the Covid-19 crisis and the lockdown, things are already in a state of flux, so we decided not to make any major changes in the system except those that were necessary to ensure COVID-safe procurement. Hence we have re-amended the rules to revert to the earlier system of paying through the Arhtiyas. We are ensuring that the Arhityas get their payment within 48 hours of purchase and they, in turn, have strict directions to make payments to the farmers electronically within 48 hours.

The farmers are already facing huge problems due to the Covid-19 related constraints, coupled with the damage to crops due to the recent unseasonal rains and hailstorm. We shall ensure that there is no delay in payment, and, as in the previous procurements under my government, we are committed to ensuring that they get every paisa worth of their produce in time.

What extra expenditure this time your government is bearing on special arrangements at mandis?

It is an ongoing process and while exact estimates will be clearer only after the season ends, there is definitely a huge additional expenditure we are incurring due to substantial purchase of masks, sanitisers and opening of the new centres, as well as maintenance of control rooms with safety precautions, and marking of all mandis to create distinct areas for each farmers produce to ensure social distancing.

What support you have got from the Centre to ensure smooth procurement in farmers’ interest?

Absolutely none. It is really unfortunate that even in this time of unprecedented crisis, we have not received any support from the Centre barring the release of the CCL. We had asked them for additional bonus as incentive for farmers to stagger the procurement at the Mandis but even that has not come. We want the farmers to store their grain for a slightly longer period this time and don’t want all of them to come to the Mandis at the same time as that would create chaos and throw all Covid-19 protocols to the wind. So we had asked the Centre to announce Rs 100 a quintal over and above MSP for those bringing in their produce in May instead of April, and Rs 200 a quintal extra for those who bring it to the Mandis in June. But that means more expenditure for them for the prolonged period of storage. And they have also suffered damage as a result of the rain and hailstorm. This incentive bonus would have helped compensate them for all this. But the central government has failed to come to our rescue.

Even at the purchase centres we have had to make special arrangements this time to check crowding and maintain social distance. We have had to expand the infrastructure, with about 3,800 Mandis this year as against 1,800-odd we had last year. All these expenses have been borne by the state government, with no support whatsoever from the Centre.

What’s the extent of damage to wheat crop of recent unseasonal rains and hailstorm occurring at grain-filling stage and even during the ongoing procurement?

The rains and hailstorm has caused damage to grain lustre, and shriveling has also been noticed in some districts like Patiala and Fatehgarh Sahib, especially in the low-lying areas where water did not drain quickly. We’ve asked for relaxation of norms from the GoI for these grains spread over a couple of thousand acres. There is no damage reported during the procurement process, which is being handled with a lot of care at every stage.