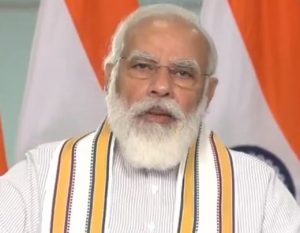 Prime Minister Narendra Modi in the 16th Episode of ‘Mann Ki Baat 2.0’ on Sunday talked about the farm bills and how farmers of the country can sell whatever they are producing or cultivating to anyone, anywhere and can get a higher price according to their wish.

PM Modi gave an example of a farmer named Kanwar Chauhan from Sonipat, who is growing fruits and vegetables and how he and his fellow farmers were able to earn from 10 to 12 lakh rupees per acre every year. PM Modi said, “Chauhan told us how there was a time when he used to face great difficulties in marketing his fruits and vegetables outside the mandi, the market place. If he used to sell his fruits and vegetables outside the mandi, then, many a times his produce and carts would get confiscated. But, in 2014, fruits and vegetables were excluded from the APMC Act, which, greatly benefited him and fellow farmers in the neighborhood. Four years ago, he, along with fellow farmers of his village, formed a Farmer Producer’s Organization. Today farmers in the village cultivate sweet corn and baby corn. Their produce is being supplied directly to Azadpur Mandi, Delhi, Big Retail Chains and Five Star Hotels. Today, the farmers of the village are earning rupees two and a half to three lakhs per acre annually by cultivating sweet corn and baby corn. Not only this, more than 60 farmers of this village, through construction of net house and poly house are producing various varieties of tomato, cucumber and capsicum and earning from 10 to 12 lakh rupees per acre every year.”

“Do you know what is different with these farmers? They have the power to sell their fruits and vegetables, anywhere and to anyone! And this power is the foundation of their progress. Now this power has also been imparted to other farmers of the country not only for marketing of the fruits and vegetables but whatever they are producing or cultivating in their fields, – paddy, wheat, mustard, sugarcane, whatever they are growing they have now got the freedom to sell where they can get a higher price according to their wish, ” PM Modi added.