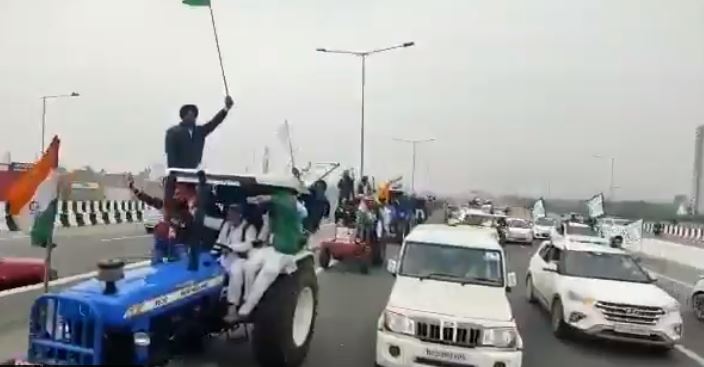 Farmers protesting against Centre’s three farm laws on Thursday took out a tractor march from Singhu, Tikri and Ghazipur borders.

The tractor march comes a day ahead of the next round of talks between protesting farmers and the government. Both parties have held several rounds of talks but failed to arrive at a consensus. Farmers have said they will intensify their protest if demands are not met.

Indian farmers mainly from Punjab and Haryana have been protesting since November 26 against the Centre’s three farm laws which was recently passed in parliament. Farmer unions described the acts as ‘anti-farmer laws’, whereas the government maintained that these acts will ease the process of farmers selling their produce directly to big buyers.

The MSP assurance has emerged as the main reason in the farmers’ protest. Farmers believed that the new laws would make the MSP system irrelevant and they would not have any assured income from their farming. However, the Central government, at many occasions reiterated that the MSP system will continue.

The seventh round of talks between protesting farmer leaders and the government was held at Vigyan Bhawan on Monday. However, the meeting remained inconclusive.