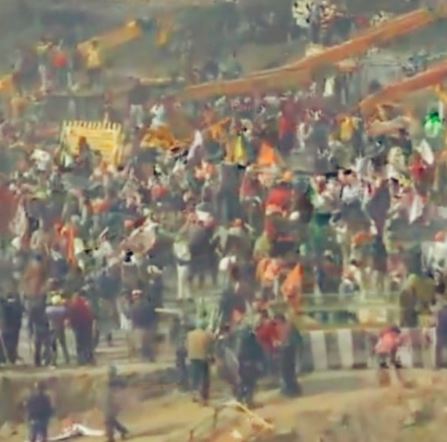 Protesting farmers camping at various border points of the national capital broke police barricades on Tuesday morning to force their way into the city.

Chaos could be seen unfolding at the Singhu border where several farmers were seen marching with flags. The farmers are marching on foot as well as on tractors.

According to officials, security personnel tried to convince the farmers that they have been given permission to carry out a tractor parade in Delhi after the completion of the Republic Day parade at the Rajpath.

Farmers carried out a tractor parade at Ghazipur border amid high security deployment.

Satnam Singh Pannu, Kisan Mazdoor Sangharsh Committee at Singhu Border said, “We’ve to move towards Ring Road but police is stopping us. We’ve given them 45 mins to speak to their seniors. We’re carrying out a peaceful parade. The route they are asking us to follow wasn’t agreed upon.”