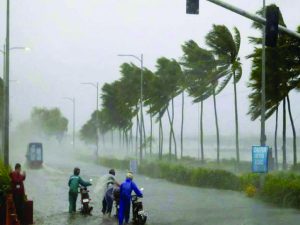 The death toll due to cyclone Fani rose to 64 with 21 fresh deaths confirmed on May 12, nine days after the ‘extremely severe’ cyclonic storm devastated coastal Odisha. The death toll which stood at 43 till May 11, rose after 18 more casualties reported from the worst-hit Puri and four more from Khurda district. At 39, the maximum deaths were reported from Puri, followed by Khurda (9), Cuttack (6), Mayurbhanj (4), Kendrapara (3) and Jajpur (3), an official at the State Emergency Operation Centre (SEOC) said.

Meanwhile, Chief Minister Naveen Patnaik directed the officials to start assessment of houses damaged in cyclone Fani which made landfall in Puri with wind speed of up to 240 kmph on May 3 and has left at least 241 people injured. Patnaik also reportedly directed that the house damage assessment be completed within one week from May 15. “I have lost my thatched house in the cyclone. No one from government has come to see my damaged house. I am waiting for the assessment since May 4. I do not know when they will assess the damage and give me assistance to construct my house,” said Shantilata Mishra, a widow at Biraramchandrapur village in Puri district.

Mishra is among the many poor people who have lost their houses and not sure when they will get assistance from the state government. “How long we should wait for the assessment? If we start construction, they may not give us assistance,” Mishra said as she wondered where she would stay in the meantime.

The cyclone affected people are gradually losing hope as the house assessment order was given on the tenth day since the calamity hit their villages with the exercise beginning 12 days after the disaster. However, the Naveen Patnaik regime took full credit for the “efficient” evacuation before the calamity. Promising full assistance for house construction, Patnaik said: “I assure that all out efforts will be put so that not a single eligible person will be left out.”

Patnaik further said that all families whose houses are completely or substantially damaged due to extremely severe cyclone will be sanctioned pucca houses. “In all the severely affected blocks, senior officers will be appointed to supervise the assessment process,” Patnaik said adding work order distribution to the beneficiaries will begin from June 1.

According to sources in the Odisha State Disaster Management Authority (OSDMA), 15,26,877 houses have been damaged in the state in different calamities in last 12 years. However, the damage caused by cyclone Fani was the most severe with as it left 5,08,467 houses damaged. The state government has demanded Rs 7,000 crore from the Centre for construction of disaster resilient houses in cyclone prone areas of Odisha.

While people are already on the streets, unable to get power and water nine days after the disaster, the house rebuilding exercise has come as an additional problem for them. A large number of affected people as well as opposition parties have also accused the state government of being inadequately prepared to deal with post-cyclone situation.

The delay in start of house assessment may cause a lot of hardship for the people, said Suresh Panigrahi, a CPI(M) leader. Congress leader Narasingha Mishra also accused the state government of having failed to handle the post-cyclone situation.

“In fact, this is one of the our main demands before the Union government. Odisha faces natural calamities almost every year. The assistance we get from the Centre is mostly for temporary restoration of infrastructure. We have to spend a lot from state’s own funds to work for the long-term,” a PTI report quoted Patnaik as saying. “This puts too much stress on our finances. Precisely for this reason, Odisha should be considered for special category status. In the last five years we had Phailin, Hudhud, Titli and now Fani. In addition to this, we has massive floods.”

Patnaik, who was sworn in as the chief minister for the first time in 2000 and is now seeking the consecutive fifth term, said it was necessary to accelerate the growth rate of the state. “We are maintaining a growth rate higher than that of the country. We are doing so well in all our socio-economic indicators. Proving special category status will help us accelerate growth,” he said.

Prime Minister Narendra Modi has announced 1000 crore assistance for Odisha and he also did an ariel survey of cyclone ravaged area. He praised the people for cooperating with the administration before the calamity hit the state and applauded Patnaik for timely relocation work to minimise the causalities. He also promised to provide all possible help from the Centre. “It is the teamwork coupled with technology that helped in this mammoth exercise. I am grateful to everyone involved, especially to our people,” Patnaik said on the praise received from the prime minister.

He also admitted that considering the storm coincided with the general and assembly elections, it was an even more difficult task for his government. “And also summer cyclones are a rarity,” said the 72-year-old Biju Janta Dal president. Fani is unlike the other storms that Odisha is accustomed to, as most of them occurred between October and December.

Asked how challenging it would be now to bring Odisha back to normalcy, he said his government is leaving no stone unturned to do it quickly. “We are putting our best efforts in bringing back normalcy. Power infrastructure has been completely destroyed, especially in Puri and parts of Khurda districts where we have to re-electrify completely. Also lakhs of houses have been destroyed in addition to serious damage to tree cover and plantation crops,” he said.

He also said that rural housing was one of the state government’s strengths, they were hopeful of completing all the five lakh houses in six months’ time. “We will also take up huge plantation drives in the coming monsoon season,” he said .

On the question of seeking help from international agencies like World Bank or ADB, he said that it could be a possibility. “For cyclone proof energy infrastructure, we would definitely explore all possibilities, including international support,” said Patnaik.

According to an assessment by a public general insurance company, losses to crops, property and vehicles amount to nearly 3500 crore in wake of Cyclone Fani, but the chief minister refused to comment on it. “We are waiting for our own assessment to be complete,” he said. Asked what was the biggest lesson he learnt as the head of the state from this calamity, he said that preparedness helps save lives.

The Odisha government, on its part, has announced a 1,600 crore package for livelihood support for farmers, fishermen and others affected by Cyclone Fani. Patnaik announced the package and included support for those dependant on animal husbandry, fisheries, handloom and handicraft.

To those who lost domestic animals in the calamity, Patnaik said 30,000 will be given per milch cow and buffalo, 25,000 per draught animal and 3,000 per goat. A financial assistance of 12,000 per hectare shall be provided to fish farmers, Patnaik said.

Similarly, additional seed money of 10,000 will be given to the affected women self help groups in the cyclone hit areas. About 268 common facility centres will be provided Rs 4 lakh each at the gram panchayat level in the extremely affected areas.

Patnaik also announced that 100 per cent remission in respect of cess on land for 2019-20 will be given to all the cyclone affected villages. There will be 100 per cent exemption on water rate for farmers in places where crop loss is 33 per cent or more during this year’s rabi season.

The chief minister launched a web portal to seek support in the aftermath of the cyclone. The website — rebuild.odisha.gov.in — has been developed for crowd funding of various projects in the cyclone-affected areas. Through the portal, a person can directly donate for restoration of schools and shelters and support the homeless. Contributions can also be made to the chief ministers relief fund on the website.

Under a special project named ‘swayamsiddha’, women will be trained in evacuation, rescue, restoration and rehabilitation during natural calamities, especially cyclones, in Odisha’s Ganjam district, according to Collector Vijay Amruta Kulange. Members of Women Self-Help Groups (WSHGs) in the age group of 18 to 35 of this cyclone-prone region will be roped in.

After facing Phailin, Hudhud and Titli cyclones in the past, Ganjam escaped the wrath of Fani. It has always faced cyclones in October. By that time, Ganjam will be well prepared through these trained women volunteers, a senior official has reportedly said. A detailed report for this project is almost ready. According to officials involved, training of WSHG members is expected to start from June this year.

Ganjam district has around 22,000 active WSHGs in its rural and urban areas. “Under this project selected members from each WSHG will undergo a special training by personnel of police, fire services, Odisha Disaster Rapid Action Force (ODRAF) and other key departments of the administration”, said Ganjam Collector Vijay Amruta Kulange. They will also be trained in basic rescue measures, first aid and proper documentation of losses. Through this training they will be ready to face floods, cyclones and earthquakes and help people of their locality.

The trained volunteers will be provided two pairs of uniform to be used during natural calamities. To keep them active and ready as peer leaders during evacuation, rehabilitation and restoration during natural calamities, they will be involved in different developmental schemes of the government like MGNREGA, housing projects for poor and distribution of food materials through PDS.

A control room of ‘swayamsiddha’ will operate at district headquarters Chatrapur to coordinate and manage these trained volunteers of WSHGs of Ganjam. According to Kulange, the Kerala government used WSHGs successfully in rehabilitation and restoration work after the floods it faced last year.

The WSHG movement has been quite successful in Ganjam district and penetrated to the grassroots. Taking this into account, the BJD had fielded 68- year-old WSHG leader Pramila Bisoi as its candidate in the Aska parliamentary constituency of the district.