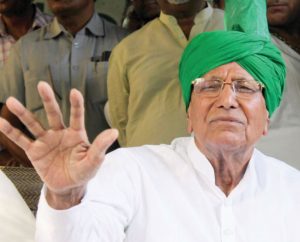 Earlier, it was talked in hush-hush tones. But now the infighting in the Chautala family has come out in public. Recent developments in the otherwise disciplined Indian National Lok Dal (INLD) party have pitted leader of opposition in Haryana, Abhay  Chautala, younger son of former Haryana Chief Minister and INLD  supremo Om Prakash Chautala against his young nephew and MP from Hisar, Dushyant Chautala, son of Ajay Chautala.

Interestingly, neither of the two leaders has ever spoken anything against each other, nor have they ever given any opinion on the leadership issue in the INLD, but the supporters of Dushyant made it clear that enough was enough and party leadership must pass now in the hands of a leader from the younger generation, an euphoria for MP Dushyant.

Both 83-year-old Om Prakash and his son Ajay are serving a 10-year jail term in the JBT teachers scam case.  Around half their jail term they can hope to become free citizens again. But their family party has been out of power for 14 years now or three successive terms and time is running out for all of them.

The differences between Abhay and Dushyant first came out in the open during the INLD’s executive committee meeting in Gurugram in the presence of Om Prakash when supporters of Dushyant started raising slogans in his favour. Taking offence at this, Chautala rebuked them.

Then at the Gohana rally in Haryana last week to mark the 105th birth anniversary of Chaudhary Devi Lal, former Deputy Prime Minister of the country and father of Om Prakash, supporters of Dushyatant again not just raised slogans in his favour, but also hooted when Abhay addressed the gathering.

This incensed Om Prakash so much that in his speech later, he took on the supporters of Dushyant and warned them against any indiscipline in the party. “Mend your ways. Indiscipline will not be tolerated in the party,’’ Chautala told the INLD workers who were shouting slogans.“Sudhar jao ya party ke bahar phenk doonga (reform yourself or else I will throw you out of the party),’’ he threatened.

He dissolved the Youth wing of INLD as well as the national and State units of Indian National Students Organisation (INSO). Incidentally, Digvijay Chautala, the younger brother of Dushyant heads the INSO. The students union elections are going to be held soon after a gap of 22 years.

Both wings of the INLD were found to be lacking in discipline and commitment to the ideals of the party. While the youth wing failed to play its role during the Gohana rally of October 7, the INSO was found indulging in blatant anti- party activities. It is also accused of entering into a conspiracy with anti-party forces to disrupt the above said rally and smear the name of INLD.

Member of Parliament and leader of opposition in Haryana Assembly and State President of INLD will be the members of the National Body by virtue of their status.

Meanwhile, amid talks of a rift in the INLD, Dushyant denied any such differences. Interestingly, Aam Aadmi Party (AAP) Haryana president Naveen Jaihind invited Dushyant  to join his party, saying he should not stay back in the INLD.

Talking to the Tehelka, Dushyant laughed off the AAP’s offer and said people who are saying such things have no standing at all in the state. “There are no fissures in the family or the party. I am an integral part of the INLD and cannot even dream of leaving it. I don’t have differences with anyone in the party,’’ he said.

According to Abhay Singh, the issue is not of gaining ascendancy by anyone. Rather it is matter of maintaining discipline. Indiscipline was witnessed in the party and that is being dealt with now, he said. He said that there was a need to restructure the two party wings of INLD and INSO as anti-party elements had managed to gain access and were trying to create problems which have been dealt with.

“People have their own sentiments about me and I cannot do anything about that. There is no leadership issue now and as such no differences with anyone’’, said Dushyant. According to reports, Abhay was not very happy with the demands raised by Dushyant’s supporters.

Dushyant’s supporters claimed he is young, popular and an excellent orator with a clean image and should be handed over the reins of the party so that he could lead the INLD to power next year in the assembly elections. The INLD has been out of power since 2004 and desperately needs to come back. The Parliamentary elections will also be held next year and the supporters claim that in the absence of senior Om Prakash and Ajay, Dushyant could be the best bet to lead the party in the next year polls.

But in the eyes of Om Prakash, it is Abhay who seems to have more importance as he has handled the party well in the absence of the senior Chautala and he is also the leader of opposition in Haryana. “During my jail term in the last few years, the party has grown from strength. I make a humble request now that the party workers should continue to strengthen the organisation,’’ Chautala senior said at the Gohana rally recently.

With the INLD seeking desperately to come back to power after a gap of 15 years in the next year’s assembly poll, Chautala, who is on a 14-day furlough, may try for a patch up between Abhay and Ajay’s  families. A united INLD will certainly have better poll prospects in the next year’s electoral tests than a divided family and the party.