An F-16 fighter jet crashed on Thursday into a building just outside March Air Reserve Base in California in the US, however the pilot safely ejected and no injuries were reported, a base spokesman said.

The crash happened as the pilot was landing following a routine training mission, said the base’s deputy fire chief.

According to the sources, the warplane went down at about 3:30 p.m. and slammed into a warehouse at the end of the base runway.

The Riverside County Sheriff’s Department confirmed on Twitter about the crash.

“Plane crash into building, pilot ejected and being medically evaluated. Please stay away from area and clear from emergency vehicles until directed otherwise,” the department added.

The cause of the crash was under investigation. 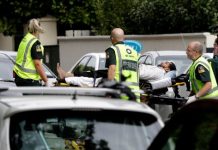