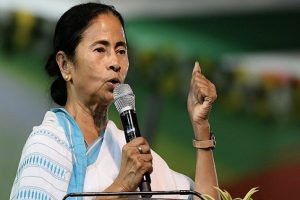 Prime Minister Narendra Modi and West Bengal Chief Minister on Wednesday engaged in the battle for the state’s 42 seats.

At a rally in Siliguri PM Modi had criticised Mamata Banerjee’s government, calling her the “speed breaker” in the path of the state’s development.

“Didi is speed-breaker for your development,” Modi said.

Banerjee questioned Modi of what his government has done for the welfare of people of the country.

She challenged him to participate in a direct debate with her in television or in a public rally.

‘I am not Modi, I don’t tell lies,’ Banerjee said, alleging that PM Modi has made false claims on the performance of TMC government in West Bengal.

She claimed that 12,000 farmers committed suicide during Modi rule in the country.

Banerjee said that her government has implemented several welfare schemes for the people of the state.