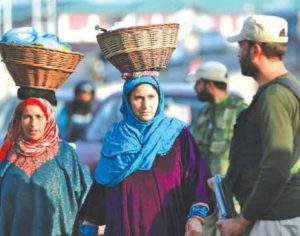 New Delhi is supposed to be mulling domicile rights for citizens of J&K whereby they will have exclusive rights to land and jobs in the union territory. There have been several indications to this effect over the past two weeks.

First came the assurance of no demographic change by no less than Prime Minister Narendra Modi and the home minister Amit Shah during a meeting with a delegation of Apni Party led by Altaf Bukhari in the middle of this month. Later Bukhari, in a statement, said that the centre will announce a concrete plan for domicile rights for people of J&K in a week.

Bukhari is focussing his politics largely around a demand for protection of land and job rights of the people of J&K besides seeking restoration of the statehood.

The Apni Party leader is trying to tap into the anxiety among a majority of the people in J&K about the vulnerability of the union territory to a demographic change following the revocation of Article 370. And this is why the Centre’s recent noises on these issues are likely to strike a chord in Kashmir Valley.

But until these promises are actually implemented, they will count for little as in past too the BJP government has made them and then done exactly the opposite. For example, last year just two days before withdrawal of Article 370, the PM Modi had made a promise to a delegation led by Farooq Abdullah that J&K’s special status won’t be removed.

As of now, most of the Centre’s energy in Kashmir is focussed on maintaining law and order in the state and ensuring no mass protests take place against the nullification of J&K’s autonomy.

It has yet to try a political outreach or signal it is ready to make some accommodation with Kashmiri demands. And considering the immense popularity of scrapping of Article 370 across the country, the space for New Delhi to make some political concessions to Kashmir is drastically limited. But the centre will certainly like to see the prominent mainstream political actors like the recently released Dr Farooq Abdullah, Omar Abdullah and Mehbooba Mufti back on Kashmir’s political scene but on its terms.

The demand for statehood and some small concessions like letting jobs in the UT government remain restricted to residents only are likely to be acceptable to New Delhi. But as things stand, it is still premature to speculate about the course Kashmir politics will take in weeks and months to come.

Bukhari has a tough job on his hands. It won’t be easy for him to credibly deliver on the tall promises he is making on Centre’s behalf. More so, when New Delhi is due to implement 37 central laws envisaged in the Concurrent List — a list of 52 items given in the Seventh Schedule to the Constitution of India — in J&K.

The Order of the implementation of these laws will be called the Jammu and Kashmir Reorganisation (Adaptation of Central Laws) Order, 2020. The laws are designed to ensure complete merger of J&K into Indian Union.

These simultaneous moves are making the shape of a post-Article 370 J&K still a work in progress. This has created a lot of political uncertainty as also the anxiety about the future.

At a time when the major leaders of the established parties remain in jail, people view  activity of the politicians like Bukhari and his cohort with suspicion. The attention they are getting springs largely from the absence of the recognized parties and also from their promise to ensure demography and domicile rights of the people of J&K are secured.