The protest by hundreds of students and teachers demanding the cancellation of re-examination of class 10 Mathematics and class 12 Economics papers has entered the second day on March 30.

Students are agitated since the CBSE announced re-examination of two exams after the alleged paper leaks. While students marched in front of CBSE office, the Opposition has been demanding to sack CBSE chief Anita Kanwal for the alleged leak.

Meanwhile, in light of the ongoing protests Section 144 (which prohibits the gathering of a group of people with the mutual intent of deliberate disturbance of the peace) has been also been imposed outside HRD minister Prakash Javadekar’s Kushak Road residence in Delhi. Section 144 has been imposed near Prakash Javadekar’s residence on Kushak Road. Pupils are questioning the system and the negligence by the authorities saying they are being made to pay for the failure of the CBSE and its examination system. 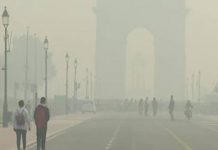