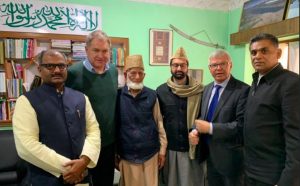 Former Prime Minister of Norway on Friday held a meeting with the top separatist leaders in Kashmir. This was revealed by the chairman of the Hurriyat faction (M)  Mirwaiz Umar Farooq in a tweet.
“Fruitful meeting of JRL (Joint Resistance Leadership) with Mr Kjell Magne Bondevik, Ex Prime Minister of Norway. As Norway is known to play a constructive role in conflict resolution across the globe urged Mr Bondevik to help in ending the daily killings and urgent resolution of the festering Kashmir dispute,” Mirwaiz posted on Twitter.
This is first time that a former Prime Minister of Norway has visited Kashmir and held talks with the separatists. Norway is well-known for its role in the efforts to resolve conflicts  in Palestine,  Sri-Lanka.
Bondevik’s visit to Kashmir and his meeting with the separatists  is thus seen as very significant.
Bondevik served as Prime Minister of Norway from 1997 to 2000, and from 2001 to 2005, making him Norway’s longest serving non-Labour Party Prime Minister since World War II. Currently, he is President of the Oslo Centre for Peace and Human Rights.