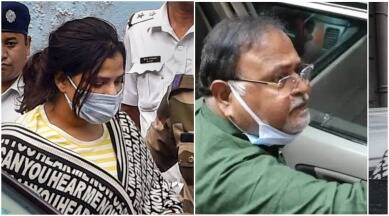 Former education minister of West Bengal Partha Chatterjee and his aide Arpita Mukherjee were sent to 14 days in judicial custody by a special court in Kolkata on Friday in the SSC scam case.

The court rejected a bail prayer of the former minister and directed that both the accused be produced on August 18 when the matter will be heard again.

Noting that the allegations are serious in nature with recoveries of huge quantities of cash, gold, properties, bank accounts and other documents during the ED custody of the two accused and that the investigation is at an initial stage, the court rejected the bail prayer.

The correctional home superintendents were directed to render all necessary cooperation to the investigators and to submit reports in court on the next date of hearing.

Judge Sadhu allowed prayers of lawyers of both the ED and Mukherjee for direction to the superintendent of women correctional home for steps to ensure her safety and security.

Chatterjee and Mukherjee have been in ED’s remand since their arrest on July 23 in connection with its probe into the money trail in illegal recruitments done by the School Service Commission (SSC) for West Bengal government-sponsored and aided schools.

The ED has claimed that it recovered Rs 49.80 crore in cash, jewellery and gold bars from apartments owned by Mukherjee, besides documents of properties and a company in joint holding.

The duo is facing charges under the Prevention of Money Laundering Act (PMLA).

Claiming that Chatterjee is not an influential person anymore, his lawyer prayed that he be released on bail on any condition imposed by the court.

Praying for Chatterjee’s bail, his lawyer submitted that he is an ordinary person now and is also willing to consider giving up his membership of the assembly.

He submitted that Chatterjee is a permanent resident of Kolkata and that there is no chance of his absconding if enlarged on bail.

Opposing the bail prayer, the ED counsel alleged that Chatterjee and Mukherjee have been found to be involved in the commission of the offence of money laundering by indulging in criminal conspiracy for the object of giving jobs which was done on recommendations from the SSC to the West Bengal Board of School Education.

The ED counsel submitted that 31 LIC insurance policies in the name of Mukherjee in which the former minister is a nominee have also been seized.

He submitted that Chatterjee is an influential leader of the ruling party in the state and that he may tamper with evidence still to be unearthed in the investigation if released on bail.