Congress leader Rahul Gandhi on Friday slammed centre over International Monetary Fund’s (IMF) projection that the Indian economy is set to contract by 10.3 per cent this year, saying it was another “solid achievement” by the government.

Referring to the IMF’s projected  GDP growth chart for the year 2020-2021, Rahul Gandhi said, “Another solid achievement by the BJP government. Even Pakistan and Afghanistan handled Covid better than India.” 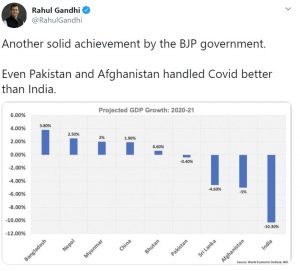 According to IMF’s projections Pakistan and Afghanistan are expected to experience a dip of 0.40% and 5% in their GDP growth this fiscal, India’s GDP is likely to contract by 10.3%.

Taking to the microblogging site Rahul Gandhi shared an image of a projection graph of per capita gross domestic product, citing its source as IMF -World Economic Outlook, in which Bangladesh was shown closing in on India this year.

Rahul has been continuously attacking the central government over the issues related to the economy and the situation in the country due to COVID-19.