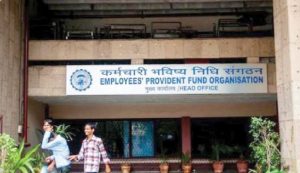 The Uttar Pradesh government has once again embroiled itself in a raging political storm and this time, it is the EPF corruption scam that has hit hard the party in power.

The already scam-hit firm, DHFCL, which received unauthorised investment of 4122.70 combining General Provident Fund and Contributory Provident Fund Trusts of power employees has now become defaulter in the share market due to unprecedented liquidity crisis. However, the power corporation has been repaid 1854.80 by DHFCL but it is yet to recover the remaining 2267.90 under fixed deposit scheme. Whicch means, around 65 per cent of the fund still remains deposited with the  defaulter company.

Recently, DHFCL was in headlines due to its alleged connection with the company of gangster Iqbal Mirchi, also a former aide of Dawood Ibrahim, as the DHFCL promoters were grilled by the Enforcement Directorate. This led the UP government to promptly refer the case to the CBI after gauging its wider ramifications.

In October, the ED had carried out raids at eight locations including DHFL’s headquarters for granting loan of 2,186 crore to Sunblink Real Estate, a company which is under probe for its alleged dealing with Iqbal Mirchi, who died in 2013.

The Economic Offence Wing (EOW) of UP police has arrested former Managing Director, AP Mishra, Director Finance, Sudhanshu Dwivedi and former secretary of the GPF and CPF Trusts PK Gupta. The EOW took them on three-day police remand from the court of Judicial
Magistrate Kshitij Pandey on 6th November, 2019.

Now EOW team will investigate them on the charges of unlawfully and fraudulently investing employees’ hard-earned contribution money amounting to rupees 4122.70 crores from their GPF and CPF Trusts in an unsecured private housing company, DHFCL, between March 24, 2017 and December 2018, almost rendering 2267.90 crores unrecoverable. The Managing Director of UPPCL, Aparna U, has been given marching orders whereas its chairman Alok Kumar is facing heat as the employees  are demanding his ouster in the interest of a fair probe.

The DHFCL future is under a cloud as the Reserve Bank of India (RBI) has imposed several restrictions on withdrawal of funds from its accounts. This has raised serious concerns about safety of deposits from UPPCL. There is no hope of any revival package for DHFCL by the State Bank of India in view of investigations initiated by Ministry of Corporate Affairs through its serious fraud Investigation organisation (SIFO).

According to Power Minister, Shrikant Sharma, the seeds of the scam were sowed during Samajwadi Party rule when  during a meeting on 24 March, 2017, the UPPCL Trustees took a decision and were signed by five people- UUCL Chairman Sanjay Aggarwal, trust secretary and general manager (finance and accounts) PK Gupta, director (finance) Sudhanshu Dwivedi, director (accounts) Satya Prakash Pandey and Mishra.

The decision reads: “The board of trustee agreed to consider the investment proposals as per government’s notification dated 02-03-2015 in the securities with higher security and high interest rates other than deposits of nationaliSed banks Triple A rated Companies. As per prevailing practice further investment in securities will be decided by secretary (trust) on case to case basis, with the consent/Approval of Director (Finance), UPPCL trustee.”

However, the FIR of scam filed by present secretary of the Trusts, IM Kaushal is mum over the dates.

Priyanka tweeted: “The employees are worried over that their hard-earned money is safe or not? One thing is clear from DHFL-PF scam that BJP government irresponsibly acted and divested employees’ money to fraudsters.”

Samajwadi chief Akhilesh Yadav too slamming UP CM Yogi Adityanath over the issue of investment of employees provident fund in scam-hit DHFCL, said, “Yogi Adityanath was so weak that even after wanting to remove the Power Minister, he can’t remove him.” “The UP government is just busy hiding the facts, even though key departments like power are facing a crisis today.”

He further demanded a probe into the issue by a sitting-High Court or a Supreme Court judge.

This further escalated tug of war as state power minister Srikant Sharma linked the controversial decision to a time when Akhilesh Yadav was at the helm of affairs. Akhilesh clarified that his government did not invest a single penny of employees PF in DHFCL. “The manner in which former CM Akhilesh Yadav always patronised arrested AP Mishra gives a lot of reasons to question the intent of those previously in power,” said BJP spokesperson Dr. Chandra Mohan reacting over the comments of Samajwadi party and Congress.

Mohan, further taking jibe at Congress general secretary Priyanka Gandhi, said, “It seems that by falsely accusing the BJP and Yogi government of the scam, Priyanka Gandhi was actually trying to save Akhilesh Yadav. There is clear partnership between the Congress and Samajwadi party when it comes to scams.”

Casting doubts over the current probe, All India Power Engineers Federation Chairman Shailendra Dubey, said, “How can the probe by the UP government hope to unearth the culprits behind this conspiracy, especially when the investments are linked with Dawood Ibrahim and Iqbal Mirchi’s company and the ED was grilling DHFL officials?”

Leaders of deceived employees now cite illegalities in formation and running of the Trusts and argue that even before the coming into being of this Contributory Provident Fund Trust, the Board of Directors of UPPCL framed Rules known as PCL CPF Rules, 2004. The said Rules, 2004, are totally ultra-vires the Employees Provident Fund &Miscellaneous Provisions Act, 1952, and have no legal sanctity, inter alia for the following reasons:

b) They are in direct conflict with GPF (UP) Rules, 1985, which have statutory force.

f) The UPPCL CPF Rules 2004, have never been placed before Provident Fund Commissioner at the Central or Regional levels, for seeking exemptions under section 17 of EPF&MP Act, 1952 nor any such exemption has been granted by the competent authority.

Insiders revealed that the meeting of the board of trustees had not been called for over two-and-a half years. The last meeting was held on March 24, 2017. Employees did not get their contributory provident fund (CPF) slip (it shows status of their PF deposit) for the last three years.

“Neither employees nor their leaders or any of employees and pensioners’ representatives, working as trustees to watch the staff’s interests, ever raised their voice against why the meeting was not being convened or why employees were not getting their CPF slips,” said a source.

The Power Sector Employees Trusts were set up after the trifurcation of erstwhile UP State Electricity Board (UPSEB) in the January, 2000, as three separate independent corporations. These Trusts were created with an objective to provide superannuating service benefits to the employees who have yet to retire and another Contributory Provident Fund Trust was formed to govern the services of post 2000 employees joining the corporation. The UP government contributed 1,600 crore to the Trust to meet the GPF liabilities of erstwhile UPSEB employees, who were sent to three newly created corporations.

The creation of Contributory Provident Fund (CPF) is not in consonance with statutory Employees Provident Fund Act 1952, as no exemption has been granted to UPPCL to run and manage provident fund. Employees’ Provident Fund Organisation (EPFO) grants exemption under section 17 of Act where more beneficial PF scheme than EPFO scheme is offered to employees.

The GPF Trust qualified the norms to have exemption whereas CPF scheme is being run unlawfully so are its shady investments putting employees money at risk without their consent despite being real stakeholders. The Yogi government has arrested three retired persons including its MD, Director Finance and General Manager Finance.

The arrest of former MD AP Mishra sent ripples in political circles as he was a blue-eyed boy of Akhilesh Yadav. With his arrest, the entire controversy has taken a political colour, as people privy to investigation see no apparent role of Mishra in these periodical investments subsequent to his resignation. A deeper impartial probe would unearth truth behind scam.