Thanks to the overt and covert political patronage, godmen and gangsters have always proliferated in our country. However, the end result in all such cases has invariably been a catastrophe. This is what led to the shocking death of 27 people, including a superintendent of police, a station house officer at Mathura in Uttar Pradesh recently.

TEHELKA team that visited the site of tragic ­incident for in-depth ground reportage found that this is a classic case as to how the sects could ­operate with impunity because of political ­patronage. Of late, pictures of such camps showing brandishing rifles, grenades, explosives and swords openly proclaiming plans to expand to other parts of the country have become viral on social media sites. The rational view of every right-thinking ­person is that a modern welfare state should have no place for religious sects, goons, mafias, whether impelled by political connections or religious cult or beliefs. Private militias are a total taboo in a ­modern welfare state. So what could have been a routine anti-encroachment drive against members of the Swadheen Bharat Subhash Sena in Mathura turned into a gory incident. This left behind a trail of blazes and a scar on the system. Was it a simple case of intelligence failure? Or was it the ill-preparedness of police in handling such a situation? Ironically, the Uttar Pradesh Chief Minister Akhilesh Yadav  has admitted the mistakes and charged the police “ill- preparedness” in taking on the organised gang of encroachers. However, he has conveniently ignored the political complicity.

The political patronage and State complicity apparently emboldened the self-appointed guru and his henchmen who piled up deadly arms and ammunition. A month ago the civic authorities had cut off electricity and water supply to the park, but it was restored in 12 hours. There were 40 intelligence reports pointing to the presence of licensed and unlicensed weapons in large numbers inside the Jawahar Bagh campus.

The BJP president Amit Shah has been most vocal when he said that “if even a little bit of self-respect is left in Netaji (Mulayam), he should get minister Shivpal Yadav to resign immediately. His words of advice to Chief Minister are “Akhilesh ji, if you have to maintain only the chacha-bhatija relation, you should end all relations with public”. The BSP chief Mayawati has gone a step ahead and demanded Supreme Court monitored CBI probe into the clash in the temple town. It seems that law and order would be a major poll issue in the coming Assembly elections in Uttar Pradesh. Is Akhilesh Yadav listening? 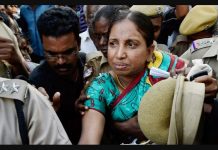