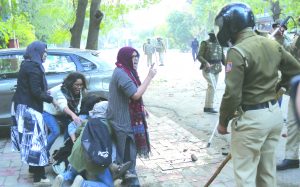 Today in our country it gets easier for the State machinery to kill a living human form than to kill the tiny little mosquito! Yes, that is the reality of the day, when the State and its Agencies are killing the human form under any possible pretext or alibi. Last week the way the students were fired at and attacked on the campus of the two universities — Jamia Millia Islamia and the Aligarh Muslim University – by the Delhi Police and Uttar Pradesh police speaks volumes. The un-armed students were merely protesting against the NRC and CAA, but the way in which they were targeted by the police force was more than barbaric. As though they were given directions by their political bosses to kill and fracture bones of our children, our students, our future.

Last week’s the so-called encounter killings of the four rape accused in Hyderabad can be termed cold-bloodied murders of the suspects. The four were not even given their basic democratic right of being heard, listened to… Mind you, the manner in which they were killed by the police force raised several questions along the strain of were they the actual rapists or were they framed to protect one of the who’s who! Next time the cops could even pick up the alleged or suspect rapists from slums and mohallas, and even before they can be heard (that is, they are allowed to even squeak or whisper) they’d be done away with it! Killed in an encounter! With the actual rapists sitting up there, on those powerful slots!

Mind you, the State even flaunts its encountering prowess! I’m left aghast at the killings taking place in developed India! If one were to focus on the state of affairs in the state of Uttar Pradesh, it is the State police that has been indulging in killings out there in the open.

State terrorism! Didn’t as many as 1,142 encounters take place between March 2017 and January 2018, in the state of Uttar Pradesh! Quoting these figures from the PUCL findings on encounters taking place in Uttar Pradesh: Since March 2017 till January 2018, 49 people have been killed in over 1,100 encounters. More than 370 have been injured and over 3,300 arrested across the state. Tell me, how many of the killed could have been innocents and not hardened criminals? But even a criminal needs to be given that chance to be heard and not get gunned down.

And if one were to focus on the encounter killings on, in the so-labelled disturbed areas or the conflict zones, then it near impossible to pinpoint the exact numbers, as there’s near nil transparency and accountability. Anyone can be gunned down on mere suspicion of being a militant or even on the alibi of chanting Azaadi!

It’s about time to re-think using the military and paramilitary to crush the civilian outcry. The ongoing ‘ war crimes’ on the civilian population compounds because of the impunity provided to the forces under AFSPA.

After all, AFSPA, a draconian law that gives special powers to the army and state and central police forces to shoot to kill, search houses and destroy any property that is “likely” to be used by insurgents in areas declared as “disturbed” by the Home ministry. Security forces can “arrest without warrant” a person, who has committed or even “about to commit a cognizable offence” even on “reasonable suspicion”. It also protects them from legal processes for actions taken under the act.

Don’t know how many encounter survivors have been left alive enough to write the actual details of the encounter…I have come across only one such survivor. In fact, one of the most chilling descriptions of an encounter taking place is detailed in the book written by the victim himself, Mufti Abdul Qayyum Ahmed Husain Mansuri, who was implicated in the Akshardham case, imprisoned for 11 years, till acquitted by the Supreme Court of India .

I had met and interviewed him two summers back when his book was launched in New Delhi. Quoting his encounter details from his book I Am A Mufti & I Am Not A Terrorist  11 Years Behind the Bars, “It was the cold night of Thursday, 18 September 2003, I was sleeping in Vanaar’s office in such position / condition that one of my hands was cliffed and locked with the table. I was asleep with great difficulty when one of the officers awakened me by kicking me on my back with his shoes. Singhal was standing in front of me and the best kind of oudh’s fragrance was witting from his clothes. Behind Singhal, one face was seen. He was VD Vanaar. On Singhal’s order, the hand cliff was unlocked from my hand .VD Vanaar took me along and said, ‘come on, its Sahab’s order today your encounter has to be done. I was told you offer namaaz /salah for dead persons, today offer namaaz for yourself. I was pushed to sit in a Tata Sumo …After misfiring on me on one or two places, Vanaar asked for the revolver from PSI,  RI Patel and after directing the vehicle (Tata Sumo ) on two, three roads, told the driver to take it near the canal .On the way, Vanaar also narrated his legend of his mastery in encounters and the allotment of medals from the government.

“He said: ‘See I have killed Hameed Lala .I have killed Ranapwala here on the stairs of the crime branch, and he counted some more names and said even after so many encounters what harm the government and the court done to me, on the contrary I was given bravery medal of ‘Puraskar’ and 51,000 — as an award. Today this encounter of yours is the sixth one .Tomorrow we will give this story to the media and newspapers that going for investigation in the case, on getting chance he ran away, somehow he got a revolver from somewhere and fired on us and on back firing (from us) he was shot …

“The vehicle was stopped at one place in the dark night. As per my assumption it was some place behind the airport, because the lights of the airport were seen from there, on both sides of the road there was the canal…Then they led the vehicle deep inside on the other side of the canal, on the left side and all the bravos got down from the vehicle after stopping it at a vast open space and they also got me down by pulling my beard and abusing me …

“Vanaar took out the revolver and told his companions to move aside a bit after he aimed the revolver on my head …I was standing alive dumb with amazement and astonished, because the bullet did not strike my head but had passed by my head. After that totally five fires were shot on my right and left head and on the left and right of my legs ….

“Until now, Mr AA Chauhan, being a silent audience in this blood shedding drama, took entry on scene. He came forward and said, ‘Vanaar sahab don’t kill him. I want to give him a last chance, after talking to superior officer .Then asked me, turning towards me — if you confess all that the superior office says then I can save your life…”

Leaving you with this verse of Habib Jalib —

‘Why did you allow yourself to be killed?’ /

Is the charge for which I am billed./

Now lawyers are arguing amongst themselves: /

‘This small trouble that the killer had to take,/

This little dent that the dagger suffered, /

Who should be made to compensate?’ 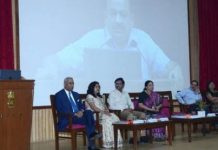