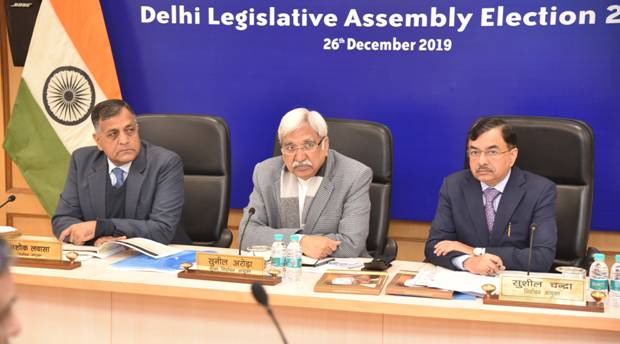 Election Commissioner, Ashok Lavasa speaking on the occasion directed election officials to respond promptly on the complaints received through c-Vigil app and pay attention on the EVM/VVPAT trainings.

During the meeting, a brief presentation was made by Dr. Ranbir Singh, CEO, Delhi highlighting status of preparedness.  He gave the status with regard to electoral rolls, manpower availability, EVMs/VVPATs, training of all election officials, and SVEEP activities focusing and targeting low turnout areas for increasing the number of voter turnout. During the review Dr. Ranbir Singh, CEO informed the Commission regarding special measures taken for facilitating PwD and Sr. Citizens voters including Pick and Drop facility.  He also informed the Commission about the facilities being created at all Polling Station locations like provision of crèche facility, ramp, water facility, mobile locker, selfie point, waiting area, wheel chairs etc.

Praveer Ranjan, Spl. Commissioner, Delhi Police who is State Police Nodal Officer made a presentation about the general law and order situation prevailing in Delhi and action being planned by Delhi Police to enforce all the measures as mandated by the Commission.

CEC directed all DEOs and DCPs and all other departments to henceforth give utmost priority to the election work so as to ensure successful conduct of election.

During the meeting with Chief Secretary, Pr. Secretary (Home) and Commissioner of Police Delhi , the Commission asked them to ensure overall supervision and coordination with all Delhi Government Departments for smooth and peaceful conduct of Election.

The Full Commission reviewed the status of preparation at the level of Districts.  All DEOs along with their respective DCPs gave detailed presentations of their District.  The Commission was informed about the preparatory action taken by the DEOs in respect of finalization of Electoral Rolls, finalization of manpower requirements, training arrangementsandSVEEP initiatives etc.  DCPs informed the Commission about the law and order aspects of the Districts. 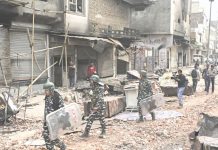