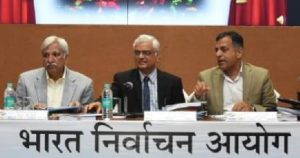 The Election Commission of India (ECI) on September 01 for the very first time announced the appointment of ‘Sugam Election Accessibility Observers’ who will help the differently-abled citizens to cast their vote inside the polling booths.

The sole purpose of ECI behind the appointment of ‘Sugam Election Accessibility Observers’ is to increase participation of disabled people in the election process.

Chhattisgarh will become the first state in India to hold disabled-friendly elections. The state is due to witness assembly polls later this year.

While briefing media in Raipur on Chhattisgarh polls, Chief Election Commissioner (CEC) OP Rawat, said, “For the first time in the country, Sugam Election Accessibility Observers will be appointed by Election Commission following the theme of accessible elections. Persons with disabilities to be enrolled and their contribution in elections will be ensured.”

Ahead of Chhattisgarh elections, CEC Rawat further said, that such persons are being identified so that facilities like wheelchair could be provided to them to reach the polling station.

CEC Rawat added, “All polling premises will have sturdy ramps (which wheelchair-bound voters can use). A database of disabled voters is being created and such electors would be enrolled and their list shall be provided to booth-level officers so that they can be given special assistance. “