Bihar police arrested 15 people for allegedly beating, thrashing and stripping the women at Bihiya in Arrah, on suspicion of involvement in the murder of a youth whose dead body was found near the railway track at Bihiya railway station.

Angered over the murder the villagers resort to violence and burnt down shops and torched vehicles, including police cars. Mob also pelted stones on several trains after which police had to fire in the air.

The investigation was led by Awkash Kumar, the Superintendent of Police, Bhojpur.

A First Information Report has been registered in the case and police raids are on to arrest the culprits.

Opposition leader Tejashwi Yadav while condemning the stripping and thrashing of women tweeted, “I’m speechless & numb to see the heart-wrenching videos of that woman. Nitish Ji, with folded hands I request you to fix the law and order & ensure women safety & security. Pls”

The man killed is identified as Vimlesh Sav, he was found dead on railway tracks on August 20 morning.

The woman who was stripped is currently under police custody and undergoing medical tests, she has denied the allegations that she killed the youth. 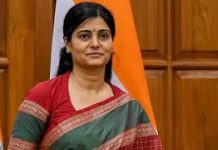