Twelve people were injured in a massive explosion at a chemical factory near Egypt’s Cairo’s airport on Thursday evening.

Injured people were taken to the hospital, but the severity of their injuries is not yet known.

“The blast was caused by “high temperatures” at a fuel storage facility”, an army spokesperson said.

According to the Egypt’s aviation minister Younis al-Masri, the air traffic at the airport has not been affected.

The blast could be heard across large parts of the city,,  According to eyewitnesses, the sound of the explosion was deafening and flames could be seen from a distance. 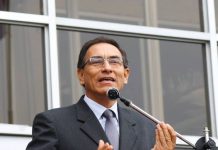 Peru declares state of emergency on its Colombian border to curb...