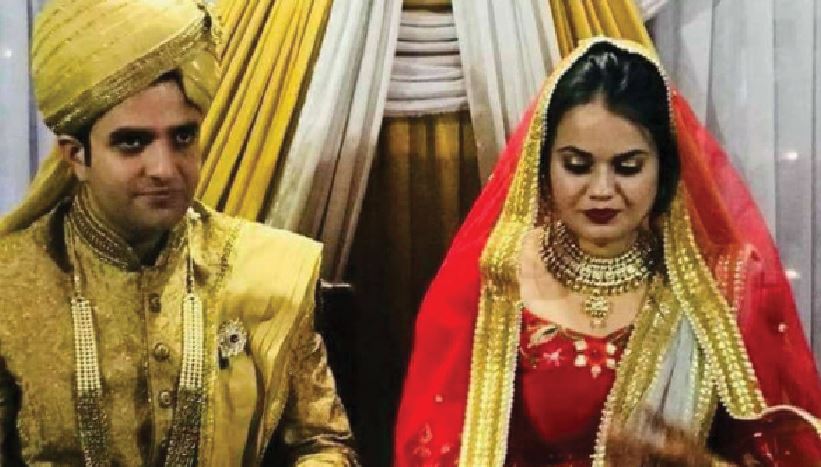 Tina Dabi and Athar Khan had tied the knot in March 2018 and served in the Rajasthan cadre. That there was something amiss in their relationship when Tina removed Khan from her surname on social media while Athar “unfollowed” Tina on Instagram around the same time. Athar, who comes from Kashmir, had secured the second position in the UPSC exams whereas Dabi who hails from Bhopal ranked first becoming the first Dalit girl to top the civil services exam in the first attempt itself. Both of them came close during their training at the Lal Bahadur Shastri National Academy for Administration in Mussoorie.

Their love story was seen as a symbol of communal harmony but now according to latest reports, Athar Khan has sought relocation from Rajasthan to Jammu and Kashmir and has approached the Union home ministry’s department of personnel for deputation to the Union Territory cadre. Enquiries reveal that as per rules, an IAS officer needs a minimum of five years of service before he can apply for a deputation. Their marriage had made national headlines and became a huge point of discussion on social media.

Many people hailed their wedding as a symbol of communal harmony. Congress leader Rahul Gandhi had congratulated the IAS couple and had tweeted, “May your love grow from strength to strength and may you be an inspiration to all Indians in this age of growing intolerance and communal hatred. God bless you.”  Venkaiah Naidu, Sumitra Mahajan, Ravi Shankar Prasad had attended their wedding reception in Delhi. There were three wedding receptions — the first in Jaipur which was a simple court ceremony, the second in Pahalgam and the third in Delhi.

Both Dabi and Athar were allocated to the Rajasthan cadre of the IAS. Individually too, both of them represent heights of achievement as Tina Dabi was the first-ever Dalit woman to top the UPSC examinations. Athar, who is a year older than Tina, is from restive South Kashmir. Tina Dabi hails from Bhopal and both parents are in the Indian Engineering Services. She studied Political Science at Lady Shri Ram College. Athar is a BTech from the Indian Institute of Technology (IIT) in Mandi, Himachal Pradesh.  Initially, both of them were in the same city, but Tina Dabi was later posted to Sri Ganganagar as Chief Executive Officer, Zila Parishad. Athar was posted to Jaipur as the CEO of Zila Parishad.

Interestingly from among the 2015 batch, 14 officers had married their batchmates, a year later the 2016 batch of 156 IAS officers, also set a record and there are six married couples among them. Apart from that, one officer has married a junior from the 2017 batch and another a senior. The six couples got married after meeting while training at the Lal Bahadur Shastri National Academy of Administration in Mussoorie earlier this year. While there’s nothing new about IAS officers choosing a batchmate or an officer from another batch as a life partner, the number of civil servants getting hitched in the last three batches has surprised many.  In 2017, 6 officers of the 2017 batch, have already married a fellow-IAS officer, while 14 officers of the 2015 batch married a batchmate.

Records from the Department of Personnel and Training showed that as many as 52 IAS officers from various batches got married to a fellow officer since 2017. Perhaps there’s something in the air in Mussoorie that helps romance to blossom and culminate into marriages.  In fact, there is a lot of interaction and you get to talk and it’s natural to fall in love.

But is the road ahead smooth?  Pressures can often lead to tension rather than understanding, and similar experiences and career prospects can turn into ego battles. Then there is the issue of getting posting in the same districts which are not possible all the time.

Ashok Yadav, a retired IAS officer from Haryana quips, “People come to Lal Bahadur Shastri Academy at the age 28-30 on an average which is the age when most couples are seeking matches. When their career path is clear, they have settled professionally, and they are of the eligible age, so they seek matches within the academy”.

However, these marriages are also a bit of a headache for the government, which needs to redo the painstaking task of cadre allocation when IAS, IPS and IFS officers choose to get married to each other, in order to ensure that the couple remains in the same state.

However, what has caused concern is the fact that divorce rates among officers are very high and a lot of these marriages do not last long. There are multiple reasons for this. A senior officer commented, “Egos among IAS, IPS officers are very high. The problem is even more if you see, marriages between an IPS husband and an IAS wife. Maybe the husband cannot bear the wife’s quicker career progression and growth and hence divorces.” In addition, there is also the fact that both the spouses are financially and professionally independent, thereby reducing their need to put up with an unhappy relationship.

Experts opine that divorces may have increased over the years because that is what is happening in society in general. Significantly, while non-marriage remains extremely rare in India, where less than 1% of all women aged 45-49 have never been married, the number of divorces has doubled over the past two decades, revealed a report from the United Nations released recently.

The report titled “Progress of the World’s Women 2019-2020: Families in a Changing World” highlighted that despite increasing rates of divorce, only 1.1% of women are divorced, with those in urban areas making up the largest proportion in India. The report said that as the women’s rights have advanced over the past decades, families around the world have become a place of love and solidarity but also one where fundamental human rights violations and gender inequalities persist. The report findings point out that the age of marriage has increased in all regions, while birth rates have declined, and women have increased economic autonomy. The report calls on policymakers, activists and people in all walks of life to transform families into places of equality and justice — where women can exercise choice and voice, and where they have physical safety and economic security. Some of the recommendations put forth by the report include amending and reforming family laws to ensure that women can choose whether, when and who to marry; that provides the possibility of divorce if needed, and enable women’s access to family resources. The report of the Organization for Economic Co-operation and Development. While the absolute number of divorces has gone up from 1 in 1,000 to 13 in 1,000 over the last decade or so. Time to ponder?