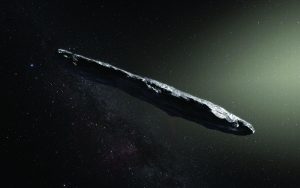 On 19 October 2017, Robert Weryk, using the Pan-STARRS telescope at Haleakala Observatory, Hawaii discovered a 1,300-foot-long (400 meters) object, zipping through space at 196,000 miles per hour. The object, named Oumuamua, which means ‘scout’ in Hawaiian, didn’t look like anything from the solar system, considering its path and the unusually fast speed, it was thought to be a visitor from the stars. All the ground-based near-earth observation telescopes were immediately instructed to set their eyes on the fast moving object.

Oumuamua made its closest approach to Earth at 24 million kilometres on 14th October, 2017. By the time earth-based telescopes catch the sight of it, the cigar-shaped object had already zoomed past the sun and was now leaving the solar system at an astronomical speed. The object soon went out of reach for even the most powerful telescopes as it sped away from the solar system.

The observation of this interstellar object has since befuddled the scientists, considering its out-of sync behaviour and the peculiar features. Oumuamua didn’t look anything like the comet, which moves far slower than it was moving and had no discharge of dust and gas from its tail, neither did it behave like an asteroid. All the observations confirmed the fact that the interstellar vagabond was not from anywhere here. And that was truly extraordinary, because nothing of that sort has ever been discovered by our telescopes and observatories. The extraordinarily fast speed of the object deprived the scientists of having a closer look at it.

Considering the peculiarity of the object, different theories are doing the rounds about the origins of this alien object. The Harvard researchers, Abraham Loeb and Shmuel Bialy conducted a study, titled “Could Solar Radiation Pressure Explain ‘Oumuamua’s Peculiar Acceleration?” They suggested that the interstellar object could be have been a light sail — a spacecraft that uses radiation pressure to propel itself. These researchers suggest that this interstellar craft could have natural origins or, alternatively, that it could have been sent out from an extra-terrestrial civilization.

Loeb said in his statement, “Its origin could be either natural (in the interstellar medium or proto-planetary disks) or artificial (as a probe sent for a reconnaissance mission into the inner region of the solar system).” The light sail objects are pushed forward as they reflect light, and so Oumuamua, according to them was being pushed by the radiation from sun.

The objects unexplainable speed shifts and sudden accelerations was mysterious and this increased the speculation of the stargazers of it being an ‘internally driven’ craft. The absence of any outgassing ruled out Oumuamua being from the comet class, or an asteroid, for the bizarre shape and the tumbling motion it was exhibiting.

“Oumuamua may be a fully operational probe sent intentionally to Earth vicinity by an alien civilization,” observed the paper. “Oumuamua showed unusual features since its discovery. These features make ‘Oumuamua weird, belonging to a class of objects that we had never seen before,” Loeb observed.

The scientists have, however, rejected the explanation, pointing that there was no possibility of it being an artificial probe sent to ‘investigate earth.’ Since its discovery, Oumuamua has become a topic of fascination around the globe. Having been the first of its kind object detected near the earth, it has spawned a gamut of conspiracy theories and explanations.

The interstellar objects, similar to Oumuamua, pass through the inner solar system about once per year, but they are faint and hard to spot and have been missed until now, according to the astronomers. The survey telescopes, such as Pan-STARRS1, are now powerful enough to detect and track them. And the lack of any advanced space transportation so far makes the likelihood of deep observation of such speeding objects extremely difficult.

For now, Oumuamua is out of sight, and on the way to a new star system. And as we will keep our fingers crossed until the next interstellar guest visits us, and hopefully till then, we will be far advanced in our space infrastructure capabilities to have a good look at that one and observe it more closely.