An earthquake of magnitude 5.6 on the Richter scale struck Northern India on Tuesday night.

According to reports, the earthquake hit at around 10.17 pm and lasted several seconds. The epicenter of the quake was at a depth of 80 kilometers in northwestern Kashmir, about 100 kilometers from Srinagar.

The tremors were felt in most parts of Northern India including Delhi NCR.

No casualty or damage of property has been reported so far.

More details are awaited on the same. 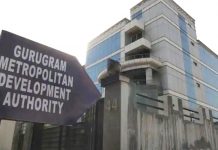