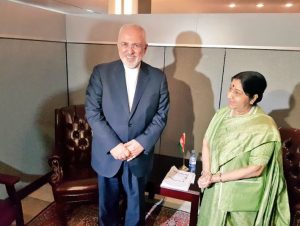 Indian External Affairs Minister (EAM) Sushma Swaraj held talks with Javad Zarif, her Iranian counterpart, and discussed bilateral issues, including the US sanctions against the major crude exporter which are set to be implemented in November this year.

EAM Swaraj and Iranian counterpart held the meeting on the sidelines of the 73rd UN General Assembly session.

Both the leaders also discussed the status of Iran nuclear deal with the EU.

“We heard them out, we also explained our position. It is important to understand that as far as the sanctions on Iran go, we are also engaged with other stakeholders and countries for example the US as well,” spokesperson Kumar added.

Spokesperson Kumar described the bilateral talks with Iran as a “good meeting”, saying the two nations share strong civilization bonds and go back a long way.

The US has told India and other nations to cut oil imports from Iran to “zero” by November 4 or face sanctions.