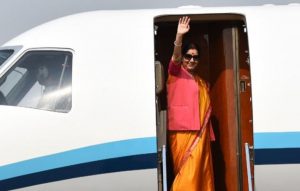 External Affairs Minister Sushma Swaraj on Thursday will participate in the 17th Council of Heads of Government (CHG) meeting of the Shanghai Cooperation Organization (SCO) to be held in Dushanbe, Tajikistan on 11-12 October 2018.

This will be the second CHG meeting since India became a full member of SCO in June 2017. CHG meeting was held in Sochi, Russia last year and was also attended by Sushma Swaraj.

Sushma Swaraj will be participating in the SCO Council of Heads of Government meeting, both in the restricted as well as extended formats.

The leaders will be discussing prospects for further development of SCO and will exchange in-depth views on current international and regional issues.

The CHG meeting is a forum that enables India to engage with SCO member countries and Observer states of Afghanistan, Belarus, Iran and Mongolia. It is the first major meeting since Kyrgyzstan took over as chair of the Organisation.