Ambala: When Jashandeep Singh Randhawa IPS took charge as SP Sonipat, illegal liquor business including manufacturing, smuggling and sale was flourishing in the district but the same was completely wiped out from the district after sometime, perhaps this was the reason state government Haryana transferred Randhawa at Ambala known as hub for smuggling and supply of liquor in the state.  However, large number of people involved in illegal manufacture and sale of liquor said good bye to such illegal practices. Not only this, a special campaign against smuggling and sale of drugs was launched by SP Ambala sometime ago.

In a recent case, during checking at Udham Singh Chowk between Barara and Adhoya in Ambala district  CIA Staff  along with Shahzadpur police led by Inspector Varinder Kumar arrested a suspected youth identified as   Sukhdev Singh alias Sikha a resident of village  Sardehri in Ambala district and recovered from him 263 gm heroine of value worth Rs 1.25 crore and a case was registered against him under sections 21/61/55 of NDPS Act.

While talking to media persons, Randhawa told that Ambala police has registered 100 cases under NDPS Act in which 119 persons were arrested in past eight months during this year in which police recovered drugs of value worth Rs 16 crore. He said, Ambala police recovered over 9 kg 99 gm opium, 3.12 quintal poppy husk, 7 kg 91 gm ganja, 238 gm charas, 64669 intoxicated tablets, 9824 intoxicated capsules, 1750 intoxicated  injection and 95 bottles intoxicated syrup. Randhawa told that property of five accused of value worth Rs 4 crore was also seized by the government.

Talking to media persons SP Ambala told that during special campaign   police arrested 124 accused in past eight months involved in serious crimes, of them police had announced prize for giving information of 12 most wanted criminals. Randhawa told that Ambala police arrested 242 proclaimed offenders, 124 bale jumpers and six persons absconding during parole in past eight months this year. 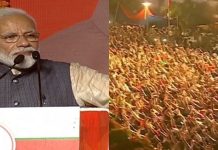