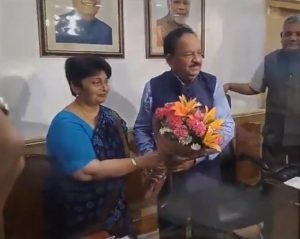 Dr Harsh Vardhan took charge as the Union Minister of Health and Family Welfare at Nirman Bhawan on Monday. He cycled to Nirman Bhawan to take charge and ascribed the act to his ‘green good deed’ for the day.

Thanking the Prime Minister Narendra Modi, Dr Harsh Vardhan stated that health of the people of this country is the top priority of the Modi government. He said that the Government will focus on strengthening promotive and preventive strategies so that people adopt positive and healthy lifestyles and remain healthy.

Speaking on Ayushman Bharat, Dr Harsh Vardhan said that “we will consider expanding eligibility criteria to include those poor and vulnerable people who have been left out from the current list of PMJAY”. He stated that concerted efforts will be made for empanelling more private hospitals. Also, that the Government will resolve the bottlenecks in the implementation of Ayushman Bharat and make it more handy and easily accessible for the common man.

“We will make Ayushman Bharat-PMJAY and Health and Wellness Centres (HWCs) into a people’s movement. More than 18,000 HWCs have become functional. The Government will take up the programme to next level with expanded package of services, availability of drugs and point of care diagnostics and tele-medicine facility. The focus will be on consolidating both the streams of Ayushman Bharat,” he added.

Vardhan emphasised to make health a ‘Jan Andolan’ through people’s involvement. He said that we can provide maximum possible help through this Ministry as there is instant benefit to the people. He further added that India has the potential and capacity for fulfilling the goal of ‘Health for All’.

Dr Harsh Vardhan also laid emphasis on elimination of TB from India by 2025 and said that the government will also take concerted and time-bound actions to eliminate Leprosy and Kala Azar. He added that the government will create a roadmap for essential devices list and a separate policy for medical devices focusing on their accessibility and affordability to masses. “We are committed to leveraging all resources efficiently to ensure that the out-of-pocket expenditure on health is reduced and all citizens can avail of necessary medical services,” Dr Harsh Vardhan elaborated.

The Health Minister stated that the government will strengthen the medical education reforms by taking up pending bills like re-organisation of MCI, etc. “The Government will use Mission Indradhanush approaches as part of UIP to ensure full immunization coverage and save all the children and pregnant women from vaccine preventable diseases by 2022, he said.

Dr Harsh Vardhan also said that he will request for higher budgetary allocation for health. He further also directed the officials for holding state specific meetings for the States that are lagging behind in IMR and MMR for aggressive progress. He suggested for creating a common working group comprising Health Ministry and the Department of Science & Technology for research and innovation in the health sector by converging the resources and potential of both the Ministries. He said that there is an urgent need to revisit the policies which have been framed many years ago and need changes in tune with the present time.