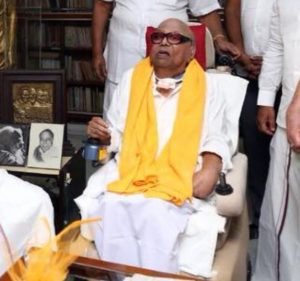 DMK Chief M Karunanidhi who was suffering from urinary tract infection passed away on Tuesday after battling for life for several days. Karunanidhi was under continuous observation at the Kauvery hospital in Chennai.

“With deep anguish, we announce the demise of our beloved Kalaignar Dr. M Karunanidhi on 07.08.2018 at 06.10 PM. Despite the best possible efforts by our team of doctors and nurses to resuscitate him, he failed to respond.”

“We profoundly mourn the loss of one of the tallest leaders of India and we share the grief of family members and fellow Tamilians worldwide,” said Dr. Aravindan Selvaraj, Executive Director of Kauvery Hospital, Chennai in an official press release. 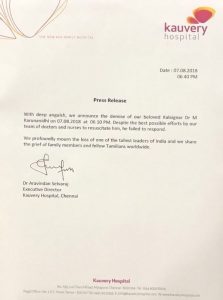 Karunanidhi, 94,  was admitted to the Intensive Care Unit of Kauvery Hospital on July 28.

PM Modi while extending condolences to the family tweeted, “I have had the opportunity of interacting with Karunanidhi Ji on several occasions. His understanding of policy and emphasis on social welfare stood out. Firmly committed to democratic ideals, his strong opposition to the Emergency will always be remembered.”

He also added that India and particularly Tamil Nadu will miss him immensely. May his soul rest in peace.

Hundreds of supporters have gathered outside the Kauvery hospital.

The Tamil Nadu government announced a public holiday on August 8.

The state will observe seven-day mourning as a mark of respect for the former chief minister.

Shops in Chennai as well as in other parts of Tamil Nadu are downing shutters early today.

Police personnel are being deployed across the capital as well as in other parts of the state.

The state DGP had ordered tightening of security across Tamil Nadu.

Reportedly all the government functions scheduled for 8 and 9 August in Tamil Nadu have been canceled. To reiterate, all cinema shows across the state have also been canceled for the next two days.

Omini bus services to Chennai have been stopped all over the state.

Meanwhile, MK Stalin has asked all the supporters to remain calm and maintain peace.