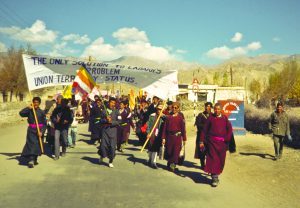 On February 8, Governor’s administration granted a divisional status to Ladakh taking everybody by surprise. Though the demand for the division status for the province is a long-standing one but so is the one from Pir Panjal and Chenab Valley regions of the Jammu province.

But while the administration ignored the latter’s demand, it addressed the one from Ladakh without  taking the state’s political opinion on board. The State Administrative Council issued the order with little prior indication of the move.

This has run into a massive controversy ahead of the upcoming Parliament and possibly Assembly elections. The government has been accused of playing favourites by picking one region over another for grant of the status.

“After the elections of 2019, should the people of J&K repose faith in [National Conference] , our government will grant division status to Chenab valley [and] Pir Panchal regions as already laid out in our regional autonomy promise,” the National Conference leader Omar Abdullah said in a tweet soon after the state government announced the division status for Ladakh.

Similarly PDP also demanded a division status for Pir Panjal and Chenab Valley. “We hail the Governor’s administration for according divisional status to Leh, but ]Governor SP Malik should also look into the genuine demands of people of Rajouri-Poonch and the Chenab Valley districts who have been demanding divisional status for their areas since long,” PDP vice-president Choudhary Abdul Hamid said at a press conference.

Also, the current arrangement hardly benefits Kargil, one of the two districts in Ladakh region, other being Leh The Government has permantently headquartered the division at Leh. Kargil is nearer to Srinagar than Leh. So Kargil has little reason to celebrate despite being the district with the bigger population. Now, political parties and the civil society groups from the district have threatened to launch an agitation and even  hold protests in New Delhi.

In response, the state administration has formed a committee of secretaries which will look into the issue so that Kargil gets justice. But this hasn’t helped the matters.

In fact, the government’s approach has only added  to the contentious nature of the move and lent it a communal colour in popular perception. Leh is Buddhist majority district and Kargil has a Muslim majority. Similarly Pir Panjal and Chenab Valley whose demand  for the division status have been overlooked have also Muslim majority. So, people in the Valley see a design on works in the government’s  decision to privilege Ladakh over the other two regions.

“The members said that the  grant of separate divisional status to any area of the state including Ladakh comes under the powers and jurisdiction of only  the genuine representatives of the state  who may take such decision after  serious and sustained  debate and discussion on available data of district developmental indices,” Kashmir Centre for Social and Development Studies (KCSDS), a civil society group, said in a statement. “The Governor has once again proved that he has been religiously following the dictates and fascist  ideology of his masters in Delhi and Nagpur against all constitutional norms and propriety”.

The issue is threatening to become a major electoral plank in the run-up to the polls, with Kashmir based parties like the NC and the PDP promising to grant divisional status to Pir Panjal and Chenab should they be elected to power.

On the other hand, the issue has already started driving politics in these two areas with the people  protesting for a division status.  And its intensity is likely to increase as elections draw nearer. At the same time, the issue is likely to figure prominently in Kashmir Valley where the move is perceived as an attempt “to implement the RSS agenda in the state”.

“If anything the state government’s decision to grant divisional status to Ladakh region has once again stoked the fears that there is a premeditated hidden agenda that is being systematically implemented in the state,” read an editorial in a Kashmir daily. “The point at issue here is not that Ladakh has been given the divisionl status, it is that this fraught and major decision was taken by a Governor’s administration as a matter of course. And that too without taking the state’s political parties on board, let alone start a public debate”.