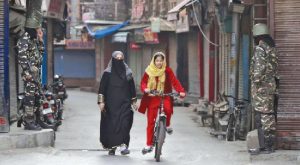 Over a year on from repeal of J&K’s autonomous status and bifurcation of the state into two union territories — J&K and Ladakh — there is a process of rethink going on about the loss of the special status even in parts of the erstwhile state that were otherwise supportive of the move. In Ladakh there is growing concern about the loss of jobs and land to outsiders now that the erstwhile part of the province of Kashmir Valley in J&K state is a federally governed region. And responding to this restiveness among the people, the BJP itself on September 3, moved a resolution in the Ladakh Autonomous Hill Development Council (LAHDC), Leh seeking protection of jobs, land rights and businesses for locals.

The LAHDC, an elected body, is charged with local governance in Leh. Ladakh has two LAHDCs for its two districts Leh and Kargil. Total population of Ladakh, according to 2011 census is 2.74 lakh. While Leh with a population of 1,33,487 is Buddhist majority, Kargil with a population of 1,40,802 is Hindu majority. The resolution was passed by the Leh LAHDC dominated by the BJP making it all the more surprising.

“Owing to Ladakh’s distinct socio-cultural aspect, its strategic location and fragile eco-system, the general public cutting across all sections of society have been demanding constitutional safeguard for protection of land, employment, environment, business and culture,” the resolution moved by the Deputy Chairman LAHDC, Leh Tsering Samdup read.

The resolution has offered the centre several options to address the issue: “Union Territory of Ladakh be granted constitutional safeguards — either under 6th schedule or or Article 371 or Domicile Act of the constitution of India to protect the tribal rights of indigenous people of Ladakh”.

However, in a setback to Leh LAHDC’s resolution, the Kargil leadership has challenged its remit to speak for whole of Ladakh. They have, instead, demanded reversal of the revocation of J&K’s autonomous status and sought to be made a part of the Muslim majority Kashmir Valley.

“Hill Council Leh passed a resolution on behalf of all ‘Ladakh’ which is not acceptable. So it is an appeal that no one should get misled with this resolution. Kargil has its own council, the leadership in Kargil have already demanded the restoration of 4 August position,”Sajjad Hussain Kargili, a Kargil leader, tweeted.

Similarly the former J&K minister and the senior National Conference leader Qamar Ali Akhoon has also rejected the Leh LAHDC proposal saying Kargil wants to be a part of Kashmir.  Though separated from J&K, the Ladakh units of major J&K parties like National Conference and the PDP continue to operate under J&K leadership.

This has made the situation very complex. Two districts of the union territory with different demographics are at loggerheads with each other over the nature of the redressal of their common grievances: the fear of loss of jobs, land and identity. Leh seeks constitutional protections but Kargil wants restoration of Article 370.

But both responses reflect a public opinion that is not at ease with the revocation of Article 370 and for entirely different reasons. Muslims in Ladakh, who are in small majority, fear having to play second fiddle to Buddhists whose demand it was to turn the region into a union territory.

At the same time, the situation in Hindu majority Jammu division is not greatly different from that of Ladakh. The region is also witnessing a degree of anxiety about the post-Article 370 state of affairs and for more or less similar reasons: loss of jobs, land and identity. People apprehend that the militancy in the Valley will persuade all eligible outsiders to settle in Jammu. People from outside are expected to find Jammu safer and culturally favourable. The new law has already granted citizenship to around West Pakistan refugees, Gurkhas and Valmikis,  who live in Jammu.

This is clear from a recent debate on the issue on a Jammu based channel participated by the province’s leaders, recorded soon after the domicile rules were issued.

Except for the participant from the BJP who defended the rules, the leaders from Congress and the influential pro-Jammu Panthers Party opposed them saying the rules will not only deprive the youth of the local employment but also pave way for the takeover of the land by outsiders.

“When the BJP talked of the revocation of the Article 370, we supported it. This was because the party promised the constitutional change will not compromise the rights of people of Jammu,” argued Harshdev Singh, the leader of the Panthers Party, in the debate. “With domicile rules you have made it easy for outsiders to settle down in J&K. Is it only our obligation to accommodate all outsiders. In no other state of India, getting a domicile is so easy. Where will our youth and people go?”

In fact, other than the BJP, all other parties have expressed their unhappiness with the existing situation including Congress. State Congress president Ghulam Ahmad Mir was part of the recent Gupkar declaration passed by six J&K parties that unequivocally sought the restoration of Article 370. The six parties comprise whole of J&K mainstream politics.

An undercurrent of unease is also underlined by the social media posts and threads from the region. Jammu fears becoming the first stop in the impending demographic change being facilitated by the new domicile rules for J&K.

However, there is a fundamental difference among Hindus and Muslims in Jammu in their response to repeal of Article 370 and the subsequent legislative and administrative changes: While the region’s Hindu majority largely seems to support the withdrawal of J&K’s special status, Muslims are against it. But the two communities are by and large equally concerned about the loss of jobs and land. Hindus are also concerned about the potential dilution of their Dogra identity. And this concern has deepened following the introduction of domicile rules in April. The rules, for the first time in last seven decades, have thrown J&K open to settlement by outsiders. And people in Jammu think that the influx of people from the outside will eventually give the control of their resources to outsiders.

The anxiety in Jammu is also underlined by the palpable erosion of the support for the BJP that had swept the last election in the province. Harshdev Singh had won public applause when he staged a solo protest against the domicile rules, so had other opposition leaders from the region including those owing allegiance to the newly floated Apni Party led by the businessman turned politician Altaf Bukhari.

However, a part of the reason, Jammu is not expressive enough about its resentments is that it is willing to wait for the restoration of J&K’s statehood until the completion of delimitation exercise that is supposed to bring Jammu’s electoral status on par with Kashmir Valley. Jammu thus hopes to be an equal stakeholder in the governance of the region and subsequently, if the demographic changes are successfully brought about, become a majority partner in a future government. So, Jammu’s interest is best served by welcoming the revocation of Article 370 – and countenancing some form of demographic change, preferably, if it is done in Kashmir – and crib at the aspects of the domicile rules that directly impact it. 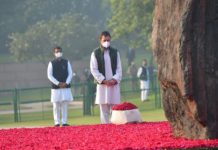 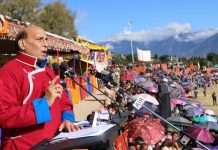