With increased vote share, TMC has stormed back to power for the second consecutive term, scripting a landslide victory for the common man, harping on development plank and tearing into a “web of lies” spread by the opposition.

Mamata Banerjee, affectionately called ‘didi’ by her supporters, has returned to power with the party getting a two-thirds majority in the 294-seat state assembly.

A sea of supporters and leaders reached TMC Chairperson and West Bengal Chief Minister Mamata Banerjee’s residence in Kalighat to exchange pleasantries with jubilant women and party workers blowing conch shells and smearing each other with ‘gulal’. She said coming together of CPI(M) and Congress was a “blunder” for both the parties and accused the opposition of spinning a “web of lies” to grab power.

Later at a press conference, Mamata Banerjee thanked the people of West Bengal for voting in favour of TMC.

She said, “We thank the common people of Bengal for standing in queues for long hours and voting for us. It’s an unprecedented victory of the common man. The way opposition has tried to conspire against us is not good for politics and public life.” 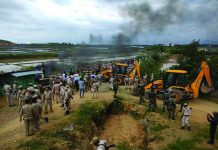