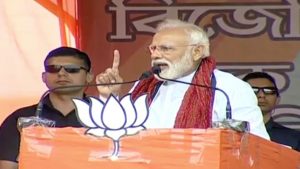 Prime Minister Narendra Modi on Sunday launched a stinging attack on West Bengal chief minister Mamata Banerjee by calling her a “speed-breaker didi” and accused her of applying brakes on several development projects in the state.

Addressing a rally at Cooch Behar in West Bengal today, PM Modi said, “the chants of Modi give sleepless nights to ‘speed breaker’. Didi is the speed breaker of West Bengal.

PM Modi further said that the centre has approved projects worth crores for Cooch Behar. It had appeared impossible, but it is possible now.

Pointing at a temporary structure of the venue with limited space for his rally in Cooch Behar, PM Modi said, “West Bengal Chief Minister had tried her best to stop people from attending the rally in large numbers. How does she expect to win the elections with such childish acts?”

Modi accused Mamata Banerjee of supporting people who want two prime ministers in the country – one for Jammu and Kashmir and one for the rest of the nation.

Referring to terror strikes, PM Modi said, “Before 2014, terrorist used to strike every now and then. Then govt was aware of where these terrorists came from. However, they failed to take any strict action despite requests from the armed forces. Now the situation has changed entirely. We now enter the homes of the enemies and kill them.”