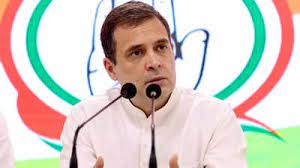 Congress leader Rahul Gandhi on Wednesday alleged that there is a dictatorship” in India now with politicians not being allowed to visit Uttar Pradesh to meet victim’s families in Lakhimpur Kheri.

He strongly condemned Lakhimpur Kheri, an incident where 8 farmers were brutally thrashed by the son of Union Minister of State for Home Ajay Mishra.

According to Rahul Gandhi-“There is dictatorship in the country today. Politicians are not allowed to visit the state; we have been told since yesterday that we can’t go,”

Rahul Gandhi has announced that he is going to Lakhimpur today along with Punjab Chief Minister Charanjit Singh Channi and Chhattisgarh Chief Minister Bhupesh Baghel.

“Yesterday, the Prime Minister visited Lucknow but he didn’t visit Lakhimpur Kheri.  It’s a systematic attack on farmers,” said Rahul Gandhi fronting a press conference ahead of his visit.

An SUV, allegedly driven by a Union Minister’s son, ran over protesting farmers in Lakhimpur Kheri on Sunday. Eight people, including four farmers, were killed in the incident.