Following the arrest of three persons, including the manager of a women’s shelter home Girija Tripathi and her husband, after allegations of sexual exploitation of the inmates came to light in the Deoria shelter home, Uttar Pradesh Chief Minister Yogi Adityanath on August 6 ordered a high-level probe in the matter.

During the press brifing, state’s Women and Child Welfare Minister Rita Bahuguna Joshi informed, “Chief Minister (Adityanath) has sent a two-member high level committee to Deoria for the investigation. They will stay there today and submit a report, following which strict action will be taken.”

Joshi added that the CM has also ordered for the removal of Deoria’s DM Sujit Kumar. Further action will be taken against him after the arrival of reports.

ADG Law and Order Anand Kumar said “The entire matter will be investigated and the local administration is already taking action. The Women and Child Development Department is also coordinating and the inquiry will be done under proper legal procedure.”

He further said that the medical test of the children would be made by a woman doctor and the statement recorded before a magistrate.

The incident was exposed when a 10-year-old inmate ran away and approached a police station.

Twenty-four girls were rescued on August 5 from the shelter home which has in total 42 inmates. Eighteen inmates are still missing. 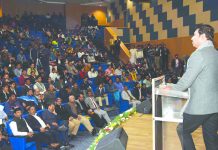