In a move to protest against the ongoing sealing drive, the traders and businessmen have decided to observe two-day bandh on February 2 and 3.
The Confederation of All India Traders (CAIT) called for a two-day bandh despite the Centre’s decision to amend the Delhi Master Plan (DMP) 2021. The association has claimed to have support of 2,000 traders’ associations in the city.
The bandh will affect markets in Connaught Place, Chandni Chowk, Karol Bagh, Kamla Nagar, Khan Market, South Extension, Greater Kailash, Lajpat Nagar, Defence Colony, Green Park, Rajouri Garden and Tilak Nagar.
According to a news report, Praveen Khandelwal, national secretary-general of CAIT, said, “To lodge a strong protest against the arbitrary sealing of commercial establishments in Delhi, the CAIT has called for a complete shutdown in which more than seven lakh business establishments and 2,500 markets will participate.”
On February 3, around 100 traders from all across India will march from Red Fort to Town Hall in Chandni Chowk. The Chamber of Trade and Industry (CTI), supported by Aam Aadmi Party (AAP) will also hold a protest march from Kashmere Gate to Old Hindu College, according to a news report. 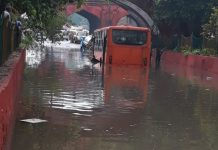