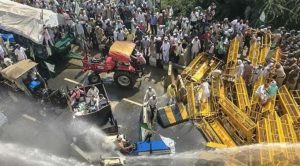 Farmers protesting against the policies of Narendra Modi government tried to enter the national capital on Tuesday using their tractors to break the barricades at UP border that were put up by Delhi police.

Police officials at the UP-Delhi border near Ghazipur had to use water cannons and teargas shells to stop the farmers from breaking the barricades.

Farmer leaders are slated to meet Union Home Minister Rajnath Singh later to hold talks on their demands. Approximately 50,000 farmers are waiting at the UP gate on NH24 to enter the national capital.

The agitating farmers have taken out the rally, named Kisan Kranti Padyatra, in support of their demands including loan waiver and reduction in electricity tariff, among other requirements. They are also seeking a provision of a pension to every farmer aged above 60.

The rally has been organized by farmers under the banner of Bharatiya Kisan Union (BKU). Thousands of protesting farmers are trying to enter the national capital. The rally is likely to create problems for Delhiites as traffic has been regulated on UP border.

Delhi Police are taking precautionary measures to prevent trouble in view of thousands of farmers march. “Traffic is also affected on NH-9, Gazipur Border and UP Gate due to the demonstration by farmers. Motorists coming from Gaziabad side & vice-versa are advised to use Kondli Village or Anand Vihar.” 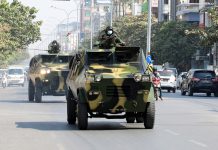