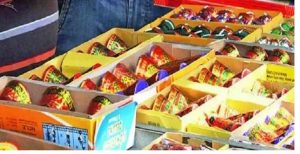 Ahead of Diwali, the Delhi Police has seized 625 kilogram of firecrackers from a shop in Sadar Bazar, following the Supreme Court order on sale of old firecrackers, an official said on Sunday.

A raid was conducted after head constable on Saturday received a specific information about the fire crackers/explosive items being stored at a shop opposite Qutub Road Parking, in Sadar Bazar, said Deputy Commissioner of Police (north).

Fire crackers/explosive items weighing 625 kilogram were found stocked in the shop during checking.

A case has been registered and further investigation is underway.