A 34-year-old man from the national capital with no history of foreign travel has tested positive for monkeypox virus, official sources said on Sunday.

This is the fourth case of the disease being reported in India.

A resident of West Delhi, the man was admitted to the Maulana Azad Medical College Hospital here around three days ago after he showed symptoms of monkeypox.

His samples were sent to the National Institute of Virology (NIV) Pune on Saturday which came out positive, the sources said.

“Contact tracing process has been initiated,” the sources said. Three cases of monkeypox had earlier been reported from Kerala.

The WHO had on Saturday declared monkeypox as a global public health emergency of international concern.

Monkeypox virus is transmitted from infected animals to humans via indirect or direct contact. Human-to-human transmission can occur through direct contact with infectious skin or lesions, including face-to-face, skin-to-skin, and respiratory droplets.

Globally, over 16,000 cases of monkeypox have been reported from 75 countries and there have been five deaths so far due to the outbreak.

In the WHO South-East Asia Region, besides India, one case has been detected from Thailand. 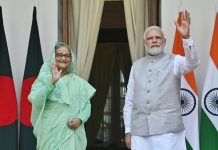