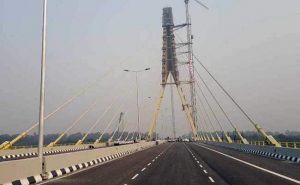 A man died on Saturday morning after his bike skid and hit the divider on Signature Bridge, Delhi. This came after two medical students on a bike were killed after ramming into a divider and falling 30 feet.

24-year-old Shankar, a resident of Ghaziabad, was riding the bike and his cousin Deepak was sitting behind him.

They were coming from Nangloi and going towards northeast Delhi when the accident happened.

Police said, “both of them were wearing helmets but Shankar’s helmet fell away after the bike skidded and he hit the divider head-on.”

Both were rushed to a hospital, Shankar was declared dead on arrival.