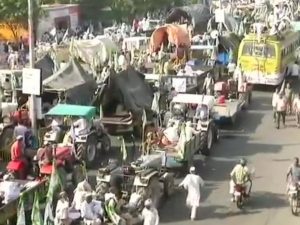 Security has been tightened on Tuesday at the Delhi-Uttar Pradesh border ahead of the arrival of ‘Kisan Kranti Padyatra’, launched by the farmers under the banner of Bharatiya Kisan Union.

Farmers from Uttarakhand, Uttar Pradesh, Punjab and Haryana are staging the Kisan Kranti Padyatra, which will conclude at the Rajghat.

The agitating farmers participating in the movement are demanding for complete loan waiver and reduction in electricity tariff, among other requirements. They are also seeking a provision of a pension to every farmer aged above 60.

The rally will pass through Ghaziabad (in Uttar Pradesh) and will proceed to east Delhi on Tuesday.

The farmers are proceeding towards Delhi with hundreds of tractor-trolleys and private vehicles, an official said.

The rally is likely to create problem for commuters in Delhi as traffic has been regulated on UP border and prohibitory orders have been issued in east and north-eastern parts of the national capital.

Delhi Traffic Police tweeted, “Traffic Alert Traffic is affected on NH-9,Gazipur Border & UP Gate due to Kisan Movement from UP Gaziabad Side. Motorists coming from Gaziabad side & vice-versa are advised to use Kondli Bridge or Road no. 56/Anand Vihar/GT Road.” 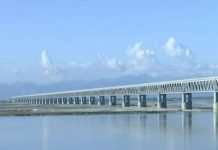