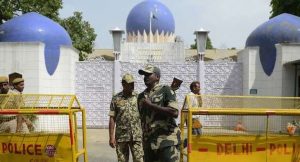 The government of India has decided not to send an official representative to the Pakistan National Day event in New Delhi on Friday.

According to the sources the government took the decision for not sending any representative to the reception because Hurriyat leaders have also been invited by Pakistan.