The Delhi Government on September 10 ordered probe into the death of five sanitation workers who allegedly suffocated to death after inhaling toxic fumes while cleaning a sewage tank in Moti Nagar area of West Delhi on September 9 afternoon.

The incident took place around 3.30pm, when the five men identified as Umesh, Raja, Pankaj, Vishal and Sarfaraj, all aged between 22 and 30 years who work as labourers, stepped into a deep sewage treatment plant of the DLF Capital Greens, a residential complex in Moti Nagar.

Witnesses and colleagues of the workers alleged that cleaning the septic tank was not a part of their duty but they did it as they had been threatened by the managing authorities that they would be sacked if they refused to do the sewage tank cleaning. They also alleged that they were not provided a safety belt or masks while cleaning the tank.

Two of labourers died on the spot, while the other three were declared brought dead after being brought to Delhi’s Deen Dayal Upadhyay hospital.

Monika Bhardwaj, deputy commissioner of police (west), said a case of causing death by negligence and under other Indian Penal Code sections will be registered at Moti Nagar police station.

“We are still in the process of identifying those responsible for the deaths. We will make arrests after that,” said the DCP. 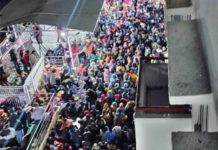