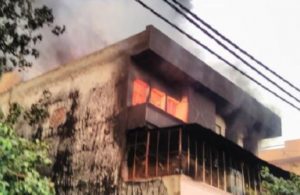 A massive fire broke out on Sunday morning in a 2-storey factory in Delhi’s Udyog Nagar area.

According to the Sources, 30 fire tenders were rushed to the spot to douse the flames.

No reports of casualty or loss of life have been reported so far.

The fire has completely engulfed the top floor of the building.

Earlier in the day, in another incident, a major fire broke out in a multi-storey building in Kolkata’s Bagri Market area, which houses mainly medicine and perfume shops.

As per the reports, the incident took place around 2.45am.

Fire tenders were rushed to the spot to douse the fire in the building that houses over 400 business establishments.

No immediate reports of casualties or injuries have been reported so far.