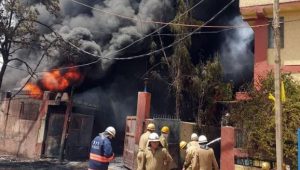 A major fire broke out at on Monday at a chemical factory in Delhi’s Naraina area.

Fire tenders have been rushed to the spot to douse the flames.

No casualties or injuries have been reported yet.

BJP lawmaker Meenakshi Lekhi took to twitter account and said that no water hydrants were installed in the property.

“Sad to learn about the fire outbreak in Naraina. Spoke to Mr. Atul Garg, Fire Officer about the situation. Incredibly, no water hydrants were installed contrary to what was proudly declared during the CW Games. Praying for everyone’s safety,” Meenakshi tweeted.