Several people including firefighters were feared trapped under the debris of a building in Delhi’s Peeragarhi after the structure collapsed following an explosion, officials said.

As per the initial information, a fire broke out at a factory in Peeragarhi early morning, after which fire tenders were rushed to the spot to douse the flames. However, during the rescue operation an explosion happened causing the collapsed of building in which several people, including fire brigade personnel were trapped.

The rescue operation is underway. 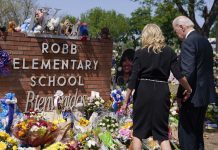