A Delhi court on Monday stayed the execution of the four Nirbhaya convicts and deferred the matter for further orders.

All the four convicts were scheduled to be hanged at 6 am on March 3.

The court deferred the matter as the mercy petition of one of the convicts is pending before the President.

Earlier in the day, Pawan Gupta’s curative petition was rejected by the Supreme Court.

Gupta had filed a curative plea before the top court seeking commutation of his death sentence to life imprisonment. 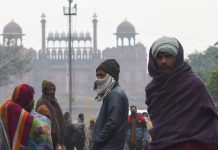