The Aam Aadmi Party (AAP) on Sunday said that party chief and Delhi Chief Minister Arvind Kejriwal will not contest the upcoming Lok Sabha elections this year from Varanasi.

However, AAP will contest on all the Lok Sabha seats in Delhi, Punjab, Haryana and Goa. The party will contest on some seats in Uttar Pradesh from the areas where the organisation is strong.

The details of seats and candidates will be announced by February-end, said by AAP MP Sanjay Singh.

Singh further said that Arvind Kejriwal will not contest the Lok Sabha polls, as he wants to give special focus to his state.

Arvind Kejriwal had contested from the Varanasi seat during the 2014 Lok Sabha elections against Prime Minister Narendra Modi and lost by more than three lakh votes. 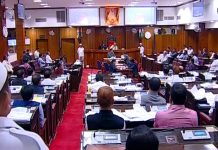