With the rise of pollutants in the atmosphere, the air quality in the national capital reached the ‘severe’ category on Saturday.

Delhi residents woke up to a thick smog which shrouded almost all areas of Delhi.

Smog reduced visibility, which made it difficult for people to drive on roads.

According to reports, the Air Quality Index (AQI) is at 486 in the ‘severe’ category in Delhi.

As per experts, the severe level affects people’s health and impacts those with existing conditions. 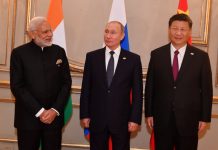