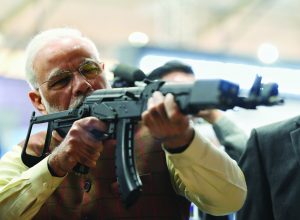 The state capital of Uttar Pradesh witnessed historic Indian Defence Expo-2020 that aims to attract more than 50,000 crores investment and creation of three lakhs job avenues for unemployed youths besides providing infrastructural boost to most backward famine-hit Bundelkhand region. The theme dominated ‘Make in India’ initiative in the strategic defence production area to achieve export market worth $5 billion so that India establishes as a defence manufacturing hub of the world and exporter.

In defence production sphere, the vision of new India envisaged mainly on creation of two large defence-manufacturing corridors in India. The aim is to bring the leading technologies in the defence sector under one roof and provide a myriad of opportunities for the government, private manufacturers, and startups.These are coming up in Uttar Pradesh and Tamil Nadu. Investments of 3,700 crore and 3,100 crore in the Uttar Pradesh and Tamil Nadu Corridors have already been declared, the Prime Minister said, while making a strong pitch for India as a global defence manufacturing hub.

UP Defence Corridor would consist of Aligarh, Agra, Jhansi, Chitrakoot, Kanpur and Lucknow to create an integrated hub for defence production units with the active partnership of private sector, state government, defence organisations and joint venture strategic partnerships. In order to give further impetus to defence manufacturing in India new targets for export have been set.

Prime Minister Narendra Modi expressed this resolve to promote indigenously developed defence products and technology with an aim to visualise the dream of former prime minister Atal Behari Vajpayee. Prime Minister said that the sub theme of Defence Expo ‘Digital Transformation of Defence’ reflects the worries and challenges of tomorrow.

“We accelerated the manufacturing of many defence products and issued 217 defence licenses in 2014. The number has grown to 460 in the last five years. India’s share in global defence exports has also gone up. In the last two years, India has exported about 17,000 crores of defence products. Now our aim is to increase Defence Exports to five billion dollars. India is manufacturing everything from Artillery guns, Aircraft carrier to Frigate Submarines today,” Prime Minister added.

“In the last five-six years, our government has made Research & Development (R&D) a major part of our nation’s policy. Necessary infrastructure is being prepared in the country for defence R&D and manufacturing. Joint ventures had worked out with other countries. An attempt had made to eliminate all silos with a focused approach. It has led to an environment that is ready to accept investment and innovation,” Modi stated.

“Defence manufacturing should not be limited to only government institutions, but it should also have equal participation and partnership with the private sector too,” he stressed. 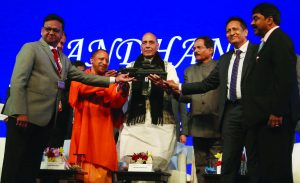 Def-Expo 2020 has covered a lot of ground in creating an environment where Indian industry forged partnerships through memorandum of understandings (MoU), transfer of technologies (ToT) agreements for innovation and manufacturing. ‘Bandhan’ ceremony facilitated launch of 13 products including Light Utility Helicopter by HAL, Sharang 155 mm Arty gun by OFB among others.

More than 120 MoUs between DPSUs, private and global defence manufacturing companies were signed (71 MoUs were signed on Feb 6th), leading to major transformation in India. Uttar Pradesh Government signed 23 MoUs envisaging an investment of 50,000 crores in the defence corridor setup in the state which is anticipate to generate 3 lakh job opportunities in the state.

The delegation of Aerospace giant Airbus revealed its plans of setting up a big project of manufacturing ‘C-295 transport planes’ in India soon. The Uttar Pradesh government has geared up to grab this opportunity by forging a joint venture with Airbus that had plan to invest about 25,000 crore for the production of military transport aircraft. This would give impetus to develop many auxiliary starts up units in collaboration with Original Equipment Manufacturers(OEMs) and MSME sector for manufacturing its components.

Def-Expo 2020 offered a platform for unique opportunities to the Indian Defence Public Sector Units forhighlighting their technological innovations and new products to the world. Thus, DPSUs displayed their strong support to the Armed forces. Theevent witnessed presence of 165 foreign companies, more than 3,000 foreign delegates, 10,000 Indian delegates and about 12 lakh visitors and laid a strong foundation for development of UP Defence corridor.

The liberalised licensing regime brought out by the government would surely attract large investments by both Indian and global companies, he stressed. He hoped to achieve $5 billion defence exports target set for the next 5 years by Prime Minister Modi.

Ajay Kumar, secretary defence, said in the previous Defence Expo, 40 MoUs had been signed and a target of 100 had been set for the ongoing expo but “we exceeded it by 100 per cent. These also include the launch of 30 products during the expo,” he said.

A major MoU signed by the UP government includes one between DRDO and UPEIDA as its knowledge partner for development of a defence corridor in the state.

This Scheme aims at inculcating IP culture in Indian defence manufacturing ecosystem. An Intellectual Property Facilitation Cell (IPFC) has been constituted which within a period of one and half years, has trained more than 15,000 people on IPR and enabled filing of more than 1000 new IPR applications. The plan also aims to establish a structure which allows full deployment of novel ideas and innovation for achieving self-dependence in defence sector.

Accord of Green Channel Status and self- certification to qualifying Indian firms is expected to cut down on inspection timelines and costs in foreseeable future. These schemes meant to target mature products where domestic defence industry has gained reasonable expertise in the technology deployed.

The DEPC has been launched with an objective to provide an opportunity for indigenous manufacturers to market their products globally and to enhance annual defence exports to 35,000 crores by the year 2025.

Under this Scheme Third Party Inspection (TPI) agencies will undertake Quality Assurance functions for defence stores manufactured by the private industry within India.

The MoD/DDP will facilitate in setting up about 6 to 8 state of the art test facilities by providing a Grant in Aid of 400 crores. This will provide a major impetus for domestic defence industries as defence testing and certification infrastructure is not available in the country which is necessary requirement for manufacture and production.

UP plans land bank of 25,000 acres: CM Addressing media on the sidelines of Defence Expo, The UP Chief Minister Yogi Adityanath said that with the environment clearance to largest airport at strategic location at Jewar in Uttar Pradesh would see major developmental transformation because of its proximity with dedicated eastern and western freight corridors.

“We will have India’s largest airport at Jewar. Along with six airports already in service, 11 more are being prepared under the Udaan scheme. We signed our first MoU with Spice Jet Technic for an MRO (maintenance, repair and overhaul) facility near Jewar,” he said.

The government had identified 12,500 acre land and would soon create a land bank of 25,000 acres, which can be offered to anyone who wants to set up an industry along defence corridor. “UP should aim at becoming a net exporter. Over the past two years since we organised investors’ summit, we have seen 35 lakh employment generated so far,” the CM claimed.

◆ Collaboration in the fields of peace & security, including UN Peacekeeping

◆ Call for strengthening the UN Counter-Terrorism mechanisms and ensure strict compliance with the UN Security Council sanctions regime on terrorism; urge international community to envisage the adoption of Comprehensive Convention on International Terrorism in the UNGA

◆ Welcome the AU vision for peace and security in Africa that coincides with India’s vision of SAGAR (Security and Growth for all in the Region).

◆ Support the great strides in reducing the number of violent conflicts in the African continent; continue to support the African Union Mission in Somalia (AMISOM) and other Africa-led efforts to enhance peace and security.

◆ Support initiatives such as African Peace and Security Architecture (APSA), Silence The Guns in Africa and Agenda 2063. 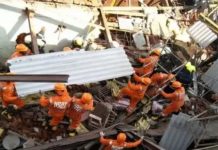