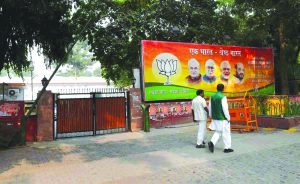 Though Himachal hills are snowing, political corridors are heating up. The reason is BJP’s defeat in crucial states of Chhattisgarh, Rajasthan and Madhya Pradesh. Lok Sabha polls are nearing day by day and this defeat has put breaks on BJP’s hopes of winning all four state Lok Sabha seats riding on Modi wave. Three state’s defeat indicates that Modi wave has somehow faded now and coming Lok Sabha elections will not be a cakewalk for them.

State BJP has planned a big function to celebrate the completion of one year of party’s government in the state. Last year, BJP won whopping  44 seats out of total 68 seats and gave Congress the biggest defeat in the last two decades. But three state’s defeat has soured BJP’s taste to hold one-year celebrations. Prime Minister Narendra Modi is expected to attend these functions to be held at Dharamshala.

BJP leaders are now looking defensive. Earlier they were claiming that party will sale through easily in 2019 Lok Sabha polls against “weak Congress. In the last four and half years, there is a pet slogan which BJP leaders say when there is any discussion of elections, “hamare paas modi hai” (we have Modi brand).  They used to say that we will work on the ground and two public meetings of Modi will ensure their victory in the elections.

But, now the body language of BJP leaders have suddenly changed. They are looking defensive. The BJP government led by first-time chief minister Jai Ram Thakur have not delivered that much which people of the state were expecting from this young and a man with a clean image. Farmers are agitating to solve their problems. They have already announced gherao of state Assembly during the budget session.

The crime rate is also rising day by day in this hilly state which is known as ‘Dev Bhoomi’. The drugs have also become a serious issue in the state. Even chief minister Jai Ram himself has expressed serious concern on the rising number of drug cases. Tehelka talked to him on this issue and he said that he is personally worried a lot on this issue. “We have taken many steps on this issue in the last one year. We hope that things will change soon, said the chief minister.

Tehelka also talked to state BJP chief Satpal Satti on the current political scenario in the state keeping in view that recent defeat of the party in the assembly elections. Satti said that this defeat will make no impact in the state. “No, no. Why this will have any impact in Himachal. In two states our governments were in power for the last 15 years. Maybe some anti-incumbency there. But despite all these factors Congress have not to win on its own,” said Satti.

The former chief minister and senior BJP leader, Prem Kumar Dhumal, who despite defeat on his seat in the last assembly elections, have succeeded in keeping himself in the mainstream BJP politics, while talking to the Tehelka claimed that BJP will win all four seats in the coming elections. “The performance of our state government and pro-people policies of Modi government will help us in winning the polls,” added Dhumal.

Though Himachal has a very small share of four Lok Sabha seats, many feel that even a single seat will matter in the next parliamentary elections. In the 2014 Lok Sabha elections BJP had won all four seats with comfortable margin riding on strong Modi wave. However, Congress leader in the state Assembly Mukesh Agnihotri said that there is nothing like Modi wave now. “He (Modi) has failed in delivering. People have fed up of his false promises. His decline is visible from results of three assembly elections.” Agnihotri, who is also the leader of the opposition in the state assembly, said that Congress will give winning faces in the elections and the party will win all four seats with the help of Rahul wave.”

The lone CPM legislator in state assembly Rakesh Singha also talked to this correspondent on the issue. He said right from farmers and youth to a common man, everyone is in distress. “The Modi-led NDA government have failed miserably to deliver. Farmers of the state are facing great hardships but BJP government in the state have also been silent on this issue. Agriculture and Horticulture is the backbone of the state economy and both are facing bad times.”

State chief minister Jai Ram recently gave plum posts of chairmen and vice chairmen to his party leaders to reduce dissent in them. However, state BJP still is divided into factions. There is unrest among the BJP leaders over chief minister Jai Ram efforts to choose his home area for major projects including the airport. Few in the party feel that this may cost heavy for the party in the coming Lok Sabha polls. Jai Ram is the first leader from Mandi district, who has become chief minister of the state.

On the other hand state, Congress also seems to be divided into factions. Though old stalwart Virbhadra Singh is not a chief minister now, he still has influence among the party MLAs and leaders. On the other hand, Pradesh Congress chief Sukhwinder Sukhu is a known rival of Singh. In the fight of these two, leader of opposition Mukesh Agnihotri is emerging as a strong leader. Though Sudhir Sharma is also considered to be close to 10 Janpath, who lost his assembly elections in 2017. 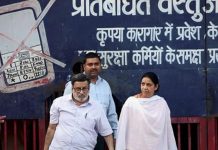